Always intrigued by eighteenth-century architecture, Mark Harbold designed a New England saltbox house as a mechanical drafting project when he was a senior in high school. Twenty-two years later he and his wife, Lorraine, built it. It looks like a Connecticut original, down to the weathered brown paint and faded red door and window sashes—except it stands about 400 miles south of its authentic counterparts, in a housing development just west of Baltimore.

The house the Harbolds built is a fortuitous combination of research, planning, timing, and connections. Compromises were made to suit a modern family’s lifestyle, but aesthetically the house remains true to its eighteenth-century inspirations.

Although born and raised in Maryland, Mark has an affinity for New England style, developed early and honed as an architecture major in college and later as owner of a shop specializing in eighteenth-century New England reproductions. To find new craftsmen and vendors, he made frequent trips north. After he and Lorraine married, he closed the shop and moved himself and the remaining inventory into her house. Still the New England trips continued, though less frequently. Lorraine also liked antiques, favoring Victoriana. As she traveled with Mark to antiques shows and traditional crafts shows, she grew to appreciate the earlier styles.

Once they decided to build, they spent three years researching and refining the design and collecting architectural elements. They toured New England house museums and old neighborhoods, filling albums with snapshots. “We’d even be out at night measuring things,” Lorraine remembers, “taking pictures of historic house interiors through windows, figuring proportions. What we found was that they varied very little, even from town to town.” Their house has the typical dimensions and classic facade of a Connecticut saltbox—a gable overhang; a thirty-eight-foot, three-bay front with a center chimney; a transom of bull’s-eye glass over the nine-panel front door; twelve-over-twelve windows. Because it was built new, the Harbolds were able to incorporate all the eighteenth-century architectural details they liked in a single structure.

Inside, the house recreates the evolution of an authentic saltbox. Its rooms flow chronologically from a circa 1700 hall, with exposed hand-hewn beams, simple beaded paneling, and a large cooking fireplace, to the 1760’s lean-to that forms the saltbox profile and encloses the kitchen and keeping room. “This is as accurate a floor plan as could be modernly made,” Mark says. “I don’t think they’ve improved on the eighteenth-century floor plan for traffic flow and ambiance. It’s really very practical and functional. I saw no reason to alter it.”

They did alter it, of course, making it work in the twentieth century. It has bathrooms, a modem kitchen, closets, an ell with a family room, and a screened porch. The initial compromises, Mark says, were not moving to New England to restore an old house and not transporting one to Maryland and rebuilding it (though they considered it). Structurally, they chose a conventional frame over a traditional timber frame because the cost to do it right would have been exorbitant. They also eliminated the traditional center dogleg front staircase; since it would not have met fire codes, a back staircase was mandatory. The staircase’s absence yielded a walk-in closet in their daughter’s bedroom and a half-height linen closet in the upstairs hallway. Mark designed the interior around the antique two-panel doors he and Lorraine found in Connecticut; they enclose closets, bathrooms, the basement, and the attic. Others had to be reproduced to meet fire codes for width and height.

Mark’s position with a company that salvages and remills old lumber for new flooring gave him advantages: he had first choice of room-length antique floor boards, and, as part of a company bid, he removed nearly 400 pounds of glass panes from an 1840’s Quaker house. He sent the glass to a glazier in Massachusetts, who installed it in new sashes, enough for all twenty-three of the home’s windows: twelve-over-twelve, twelve-over-eight, nine-over-nine, six-over-six. The Harbolds had to buy radial-sawn spruce siding even before they applied for their construction loan because the Vermont manufacturer ran it only once a year. Mark stored it—along with the windows and floor boards—in his company’s warehouse.

With each trip to New England, they made new contacts. A Connecticut antiques dealer introduced them to a dairy farmer who stored pieces of old houses in two-hundred-foot chicken bams, where the Harbolds found thumb latches and eight of their twenty antique doors. Answering an ad in the Newtown Bee led them to a state trooper who salvaged and sold architectural elements; he recommended they see “the young guy down the road.” Cabinetmaker Bill Treiss, who had just started his own business, became a primary source. His price for interior paneling, an extra they had planned to add later, was too good to pass up. Treiss also made the paneled doors for the kitchen and bathroom cabinets, installed over inexpensive boxes made by a local carpenter. Reproduction furnishings and accessories left from Mark’s store, along with antiques (mainly chairs) the Harbolds have collected, fill the house.

There were no decisions without financial ramifications, Mark says, but the couple’s advance planning and some lucky connections allowed them to stay very close to their initial budget. “If you can pay $125 a square foot for high-quality custom work you’re doing well,and that’s without windows,” he says. “Ours cost under $100 a square foot. It’s a matter of doing your homework.”

For the Harbolds, doing their homework paid tangible dividends. 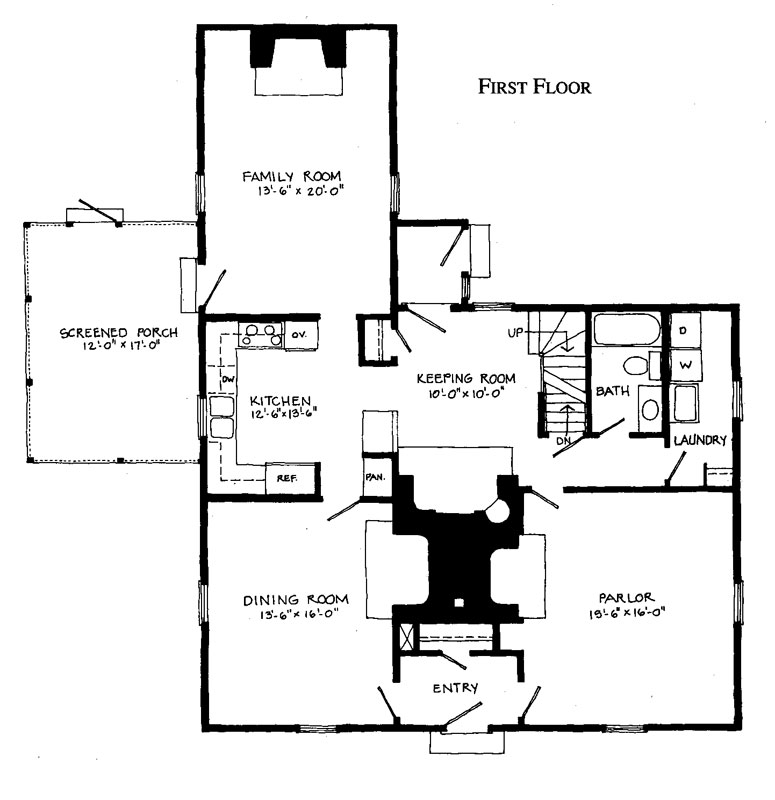 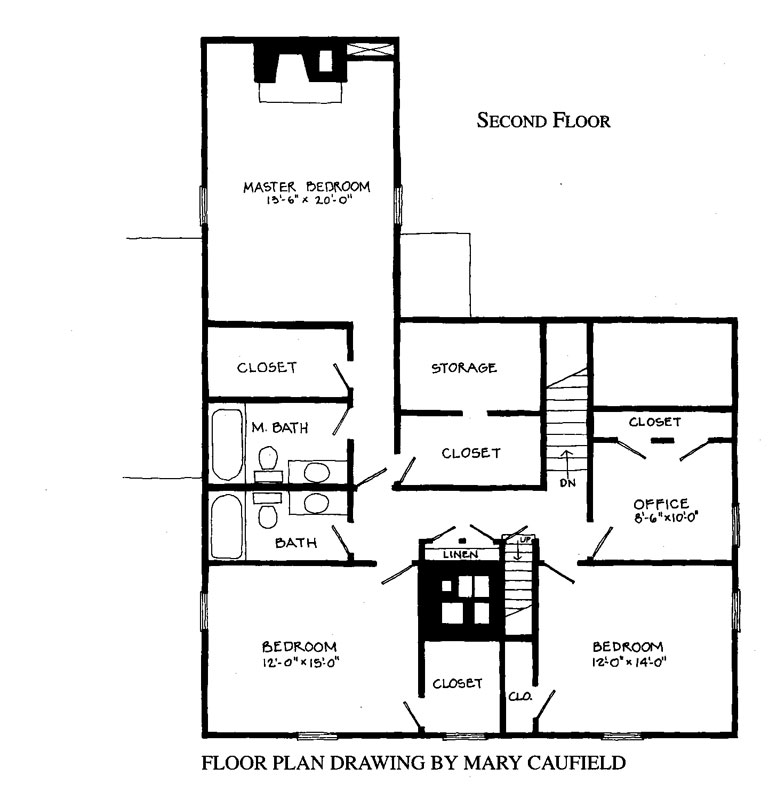 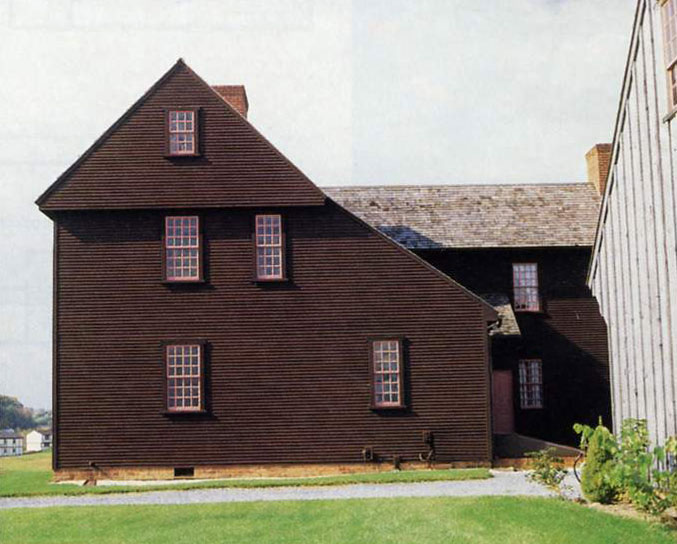 Alone on a small rise, the Harbolds’ weathered brown saltbox looks like a generations-old farmhouse on what little land remained after the family holdings were sold off. It contrasts sharply with the modern brick-faced, vinyl-sided homes that comprise the rest of the development. Building first, they were able to set the house at an angle, use wood siding, and erect a free-standing garage, liberties later neighbors were unable to take. 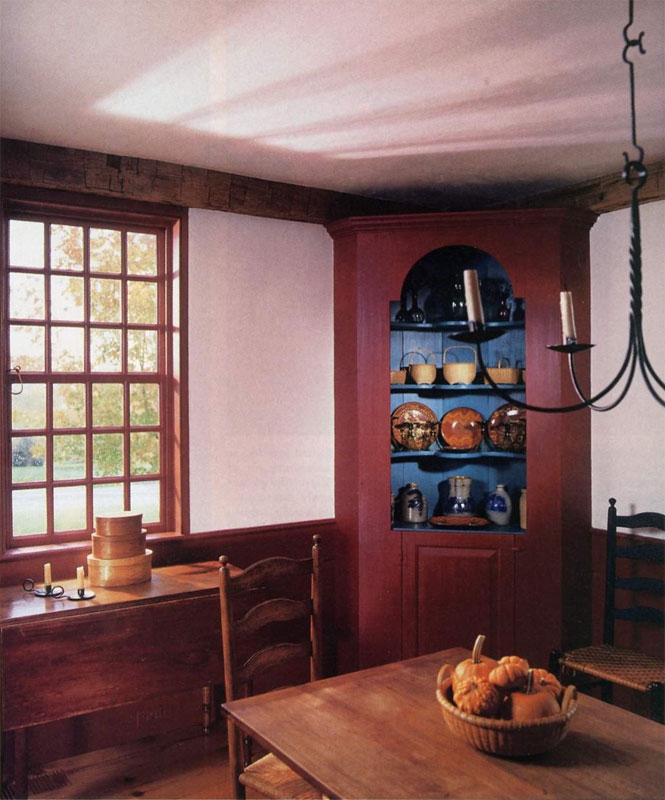 Mark Harbold borrowed the corner cupboard design from Russell Kettell’s The Pine Furniture of Early New England, rescaling it to the height of the hall, the home’s “oldest” room. Bill Treiss made it in Connecticut; the Harbolds hauled it home on top of their car. “It looked like a coffin,” Mark says. It’s filled with reproduction stoneware, redware, and glassware, and Shaker and Nantucket baskets, some inventory from Mark’s former store, some new from craftsmen. The large table, also a reproduction, is flanked by 18th-century ladderback chairs; a Vermont blacksmith made the chandelier. The maple drop-leaf table is a mid-19th-century antique. 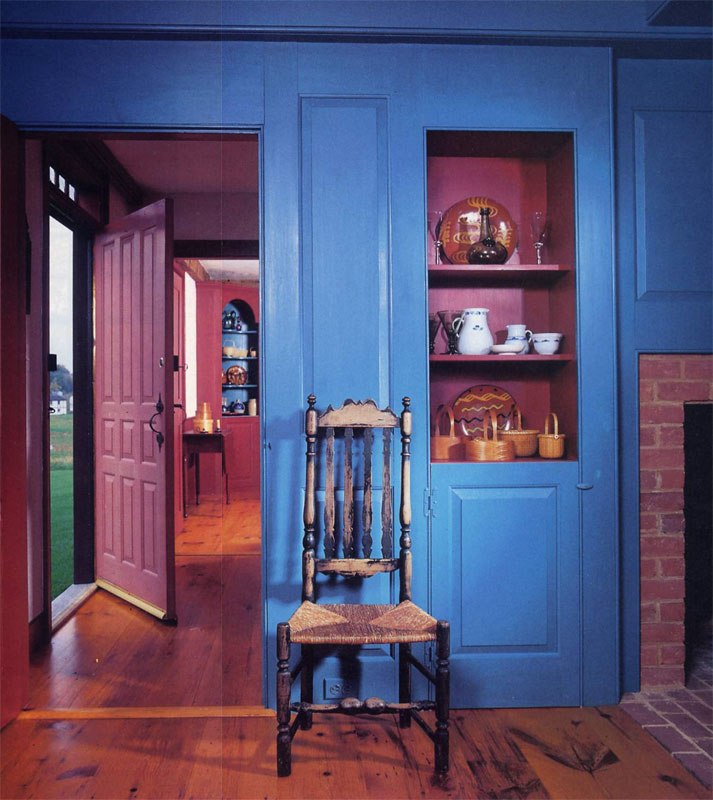 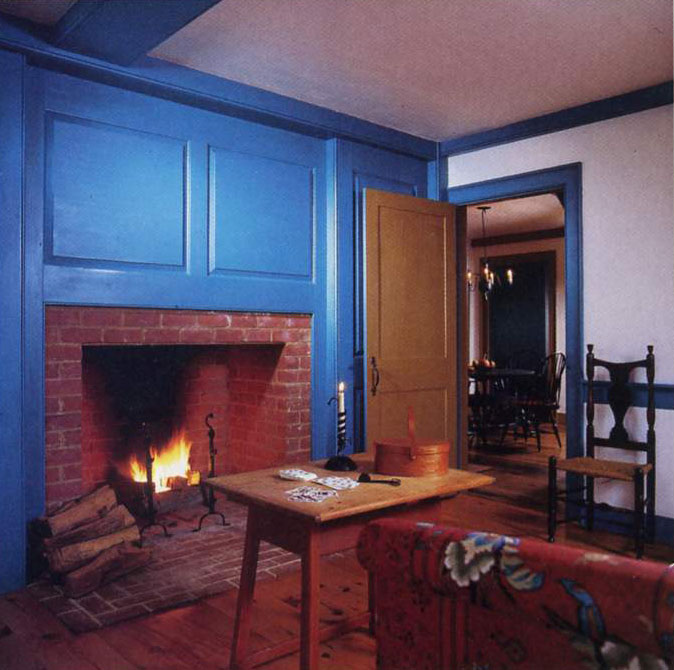 Another view of the parlor shows the fielded paneling by Bill Treiss, painted Stulb’s Richardson House Blue. When closed, the door to the keeping roomcompletes the paneled look. The Harboldsrestored the 18th-century New England tavern table using milk paint on the base. Blacksmith John Tyler made the courting candlestick and fireplace andirons. Next to the keeping room door is an antiqueConnecticut Queen Anne splat-back chair. 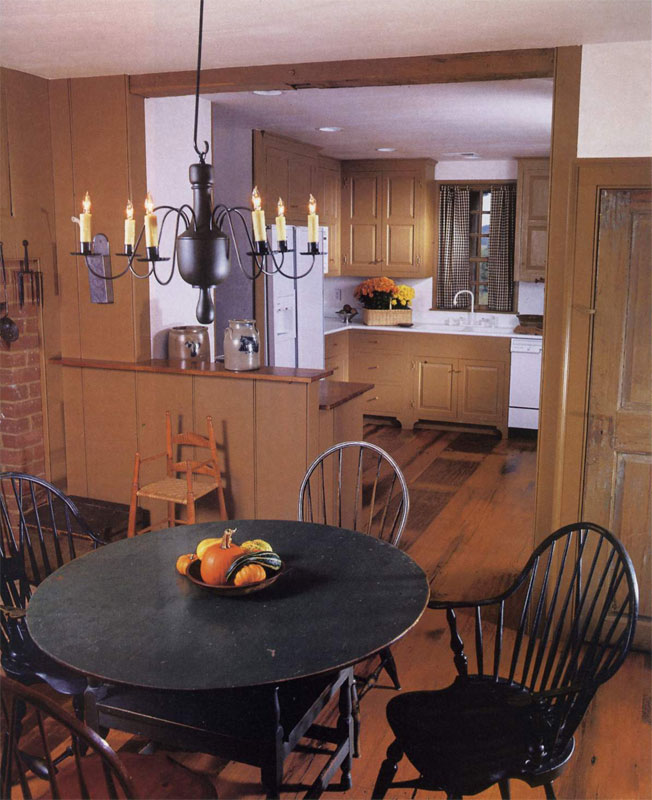 A view of the keeping room and kitchen with a restored antique hutch table and reproduction Rhode Island Windsor chairs. Hammerworks made the chandelier. The Harbolds stopped stripping the two-panel closet door when they reached the original mustard color; the inspiration for the kitchen cabinets. Ghosts of old hinges indicate the door had been hung upside down for years. Where a room was obviously 20th-century, they kept it that way; the simple all-white appliances, plumbing, and countertop complement the paneled cabinets with turned knobs. 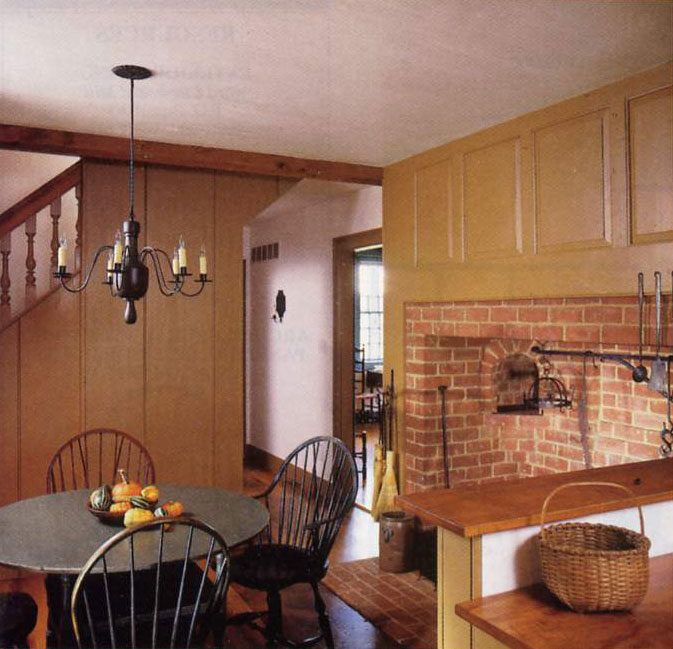 The keeping room fireplace with a beehive oven is one of five fireplaces in the house, each with a different brick design. Most of its iron utensils are antiques. Mark drew the pattern for the staircase banister and balusters based on a staircase in the Wanton-Lyman-Hazard house in Newport, Rhode Island, built before 1700; furniture maker Ken Heiser embellished them when he shaped them 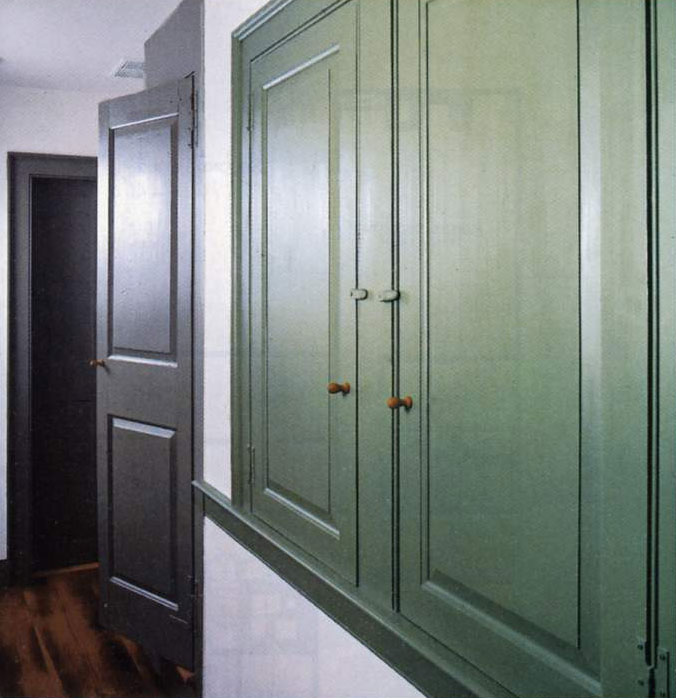 The acute angle of the chimney from the keeping room fireplace left a passageway behind the chimney in the second-floor hallway; it became a convenient linen closet. The antique two-panel door at the end of the hallway leads to the attic.