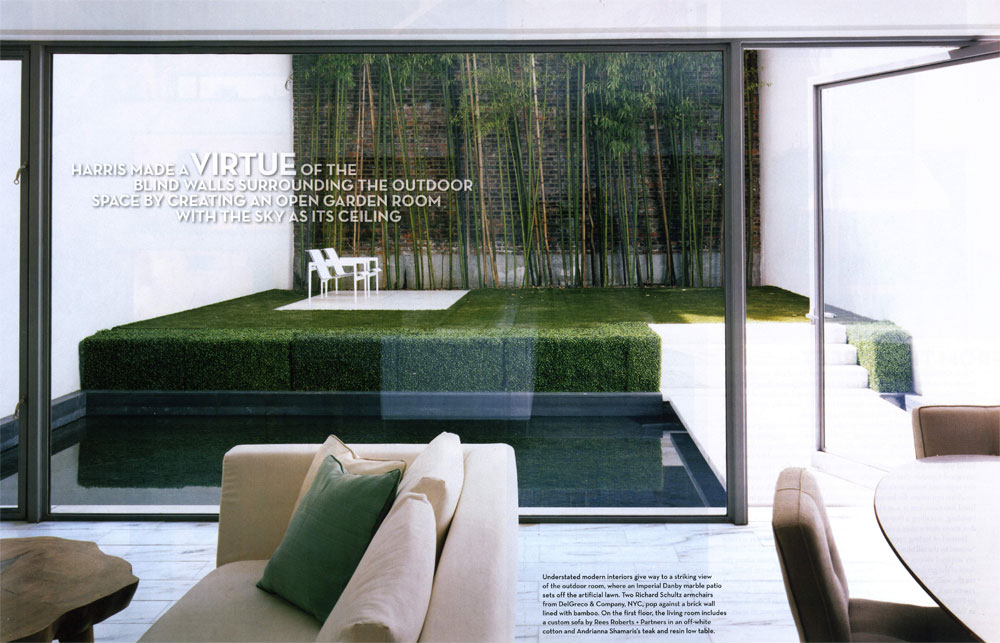 Harris made a virtue of the blind walls surrounding the outdoor space by creating an open garden room with the sky as its ceiling. Understated modern interiors give way to a striking view of the outdoor room, where an Imperial Danby marble patio sets off the artificial lawn. Two Richard Schultz armchairs from DelGreco & Company, NYC, pop against a brick wall lined with bamboo. On the first floor, the living room includes a custom sofa by Rees Roberts + Partners in an off-white cotton and Andrianna Shamarias’s teak and resin low table.

Adam Gordon’s house looks like the others on his block, except a little better—beautifully restored 1858 facade, handsome parlor floor windows, and an ironwork fence. “There is so much privacy and decorum about that facade,” says Gordon’s architect, Steven Harris. “It looks like a polite, decorous Jane Street house.” That is, until you get inside.

Gordon, a real estate developer, bought the house after being warned by the broker that there was a problem. “I don’t think you are going to like it,” he remembers her saying, “because there is something wrong in the back.” What was wrong was that the outdoor space was enclosed by the three blind walls of the surrounding buildings; it had no view. This liability so intrigued Gordon that he bought the place sight unseen. He approached the neglected house with its forlorn rooms and viewless back in a spirit of steadfast optimism. Its limitations inspired him to imagine living in streamlined interiors, but it was Harris who took things to the edge, gutting the building, installing a five-story wall of glass at the back, and creating a garden room that makes a virtue of the site’s defects.

Instead of feeling oppressed by them, Harris reports that he was actually “wowed by the tall blind walls that surrounded the garden.” The unique boundary inspired visions of a “surreal, Magritte-like open garden room where the floor of the garden is the floor, the sky is the ceiling, and the adjacent buildings are the walls.” The idea for the glass walls at the rear of the house was inspired, Harris says, by the Rockefeller guesthouse in midtown Manhattan designed by Philip Johnson, as well as by one wall of the art gallery Louis Kahn designed at Yale, where Harris has been teaching architecture over the past 20 years. 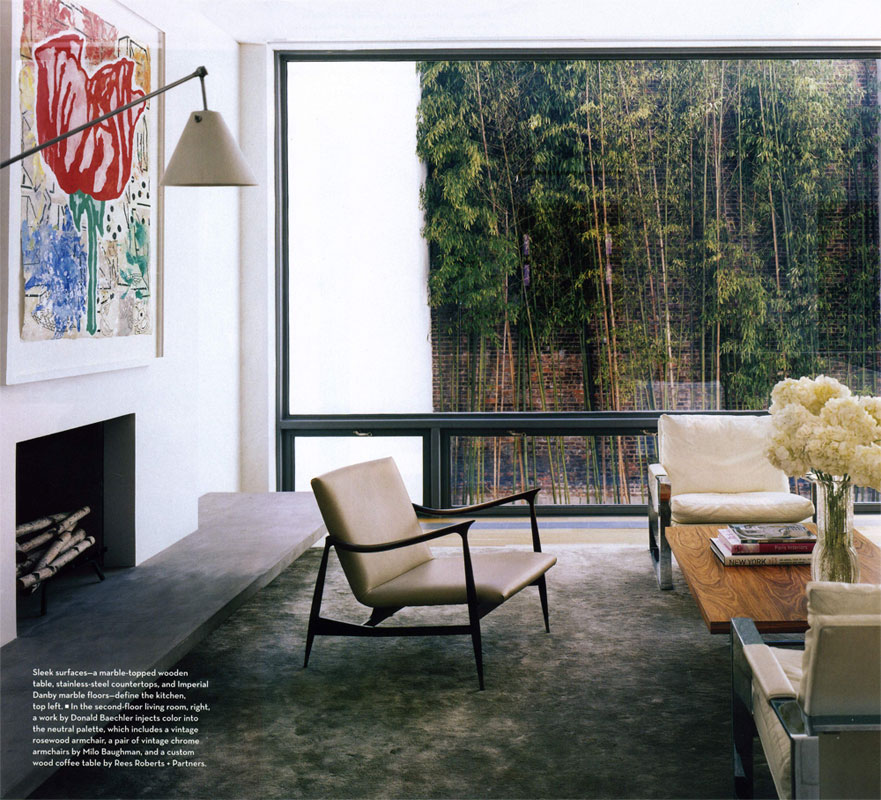 In the second-floor living room, a work by Donald Baechler injects color into the neutral palette, which includes a vintage rosewood armchair, a pair of vintage chrome armchairs by Milo Baughman, and a custom wood coffee table by Rees Roberts + Partners.

The architectural punch of the place arrives the minute you enter and walk to the back, with its spectacular views. “We have done thirty town houses in the city, and nothing is this spare,” Harris says. “I wanted your eye to go pow at ninety-five miles an hour—straight to the back, to feel like you were outside.” To obtain the monumental plates of glass, they researched every supplier in North America, finally acquiring “the biggest sheets of glass you could get that don’t have to come through the Panama Canal.” The pieces were so big that they had to be lifted from the street and over the house to be installed. Harris also removed the bay that jutted from the back of the house, which, in accordance with New York building codes, allowed him to redeploy that space in a rooftop room and create two terraces and indoor and outdoor fireplaces.

The moldy backyard was cleaned out and transformed, enabling the building’s exterior to take on an entirely new character in sync with its reworked interior. The original idea of maintaining a sod lawn surrounded by boxwood hedges gave way to a more imaginative solution. Now synthetic grass and artificial hedges define the lot with a line of actual towering bamboo that reaches for the sky.

For those who consider fake grass a travesty, Steven Harris has an answer in the Synlawn he used for the garden. “It’s completely believable,” he says, “and it feels wonderful underfoot.”

New York’s strict zoning laws do allow for some flexibility. Harris says, “You cannot increase the size of a building, but you can redeploy that square footage.” That’s how he created the penthouse-like space on the roof.

The Nomad at Home

Adam Gordon attributes the innovations in his house to his nomadic approach to living: “For me, projects are sort of like Tibetan sand mandalas. The monks work laboriously to create a unique design, and when it is over, they move on.” His house is not a monument to himself, and he is not afraid to leave it now that it is finished.

Although Gordon sees this project as a radical departure from his former town house, he maintains that the broad modernist strokes of this place are discreet compared with Richard Meier’s nearby Perry Street apartments. “The Richard Meier houses, which I love, are houses for people who like to preen. It’s a very public statement about your aspirations. This place has the same kind of transparency, but it is very private. No one knows you are here.”

The serene palette of the interiors, designed by Gordon and Harris with some help from Rees Roberts + Partners, is interrupted only by the artwork and emerald green garden floor. The spare furnishings attest to Gordon’s changing aesthetic. “Houses can be like an autobiography,” Gordon says, “and this is mine.” Gone are the pieces of sixteenth- and seventeenth-century furniture from his former town house, where the walls were saturated in hues of burnt orange and bright pink. “When I came down here, I didn’t know what it would be like to live in a modern house,” he says. But he made the transition easily, and it seems to have inspired in him a desire for further transformations.

“I have always said that I am going to leave this house feet first,” Gordon says with a laugh. But that was before he spied another property, whose appeal lies in what he describes as its “grand decay.”

Harris will be accompanying his client on his next adventure, again employing his architectural wizardry on a challenging project. But Jane Street will always hold a special place for him. “Architects do a lot of projects, and there are very few that they want,” he says. “I want that house.” 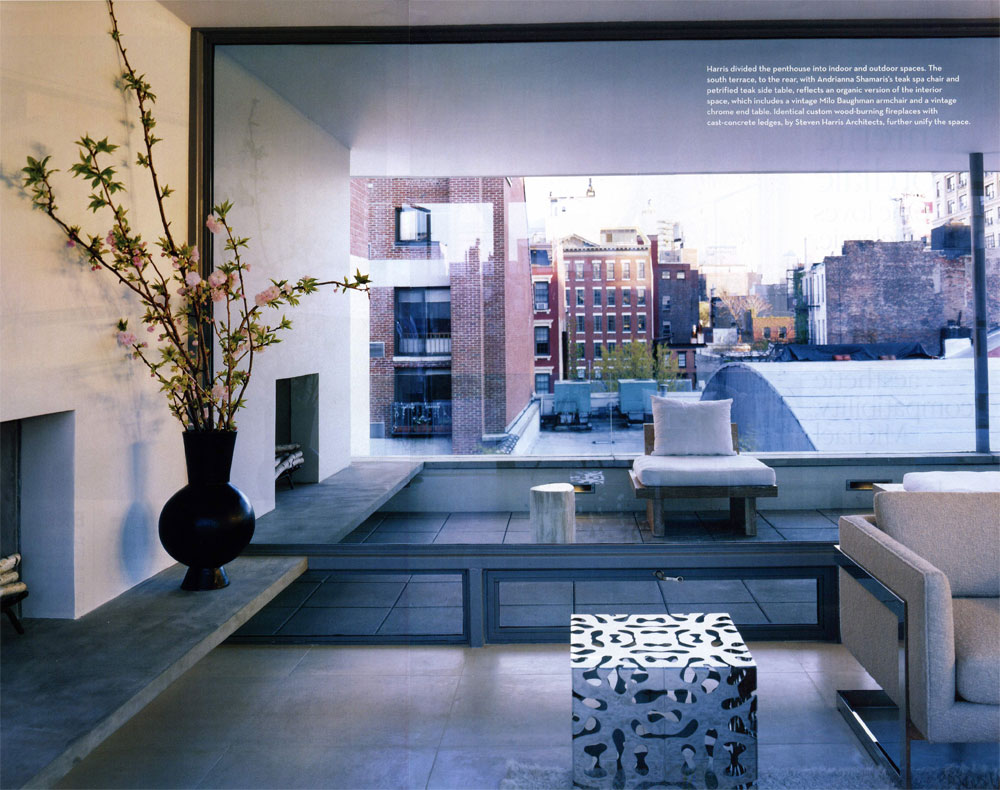 Harris divided the penthouse into outdoor and indoor spaces. The south terrace, to the rear, with Andrianna Shamaris’s teak spa chair and petrified teak side table, reflects an organic version of the interior space, which includes a vintage Milo Baughman armchair and a vintage chrome end table. Identical custom wood-burning fireplaces with cast-concrete ledges, by Steven Harris Architects, further unify the space. 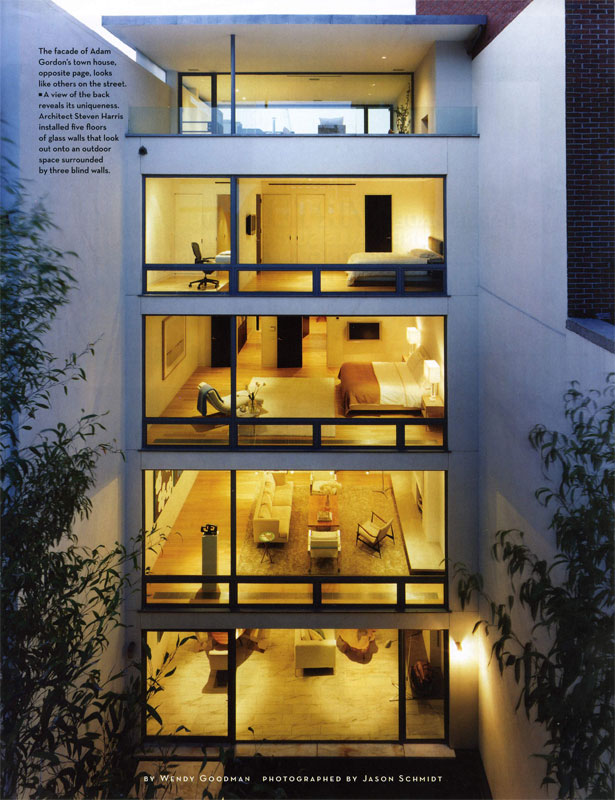 The front facade of Adam Gordon’s town house looks like others on the street. A view of the back reveals its uniqueness. Architect Steven Harris installed five floors of glass walls that look out onto an outdoor space surrounded by three blind walls. 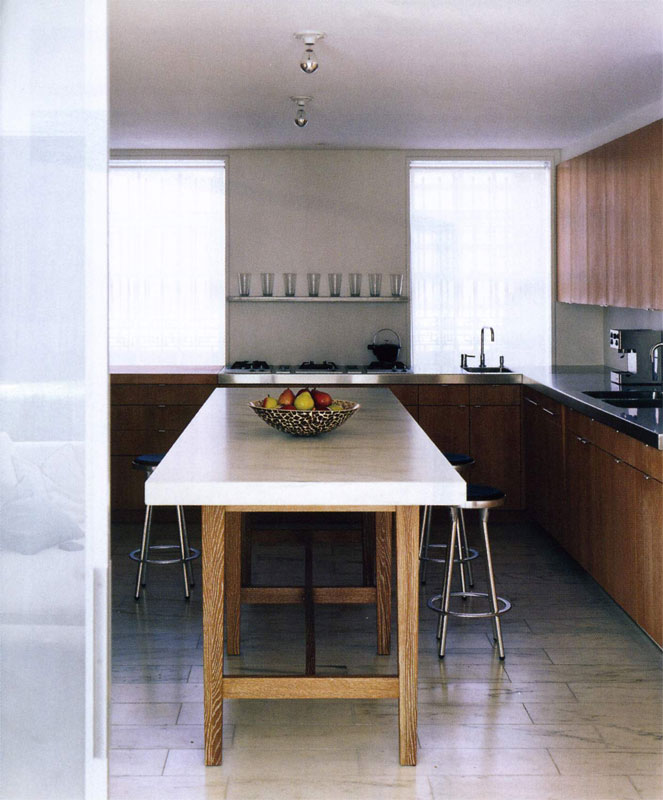 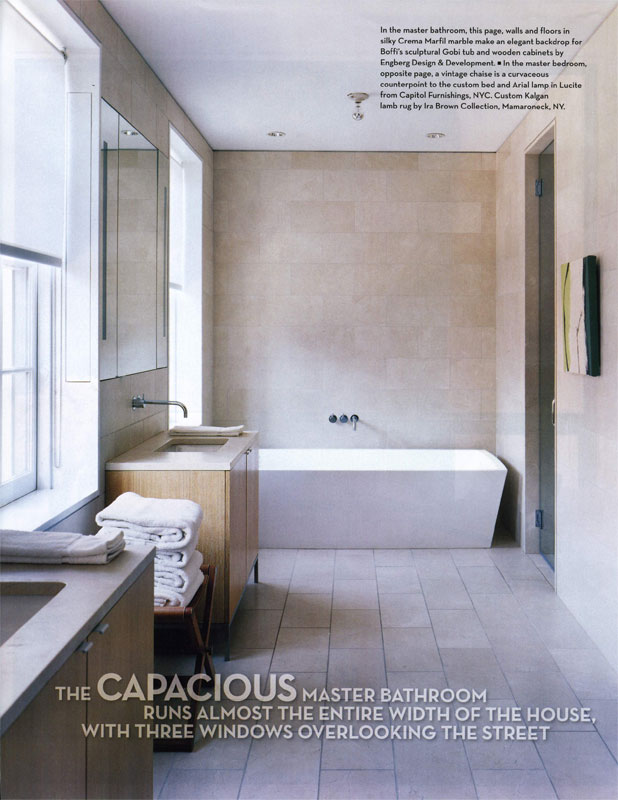 In the master bathroom, walls and floors in silky Crema Marfil marble make an elegant backdrop for Boffi’s sculptural Gobi tub and wooden cabinets by Engberg Design & Development. The capacious master bathroom runs almost the entire width of the house, with three windows overlooking the street 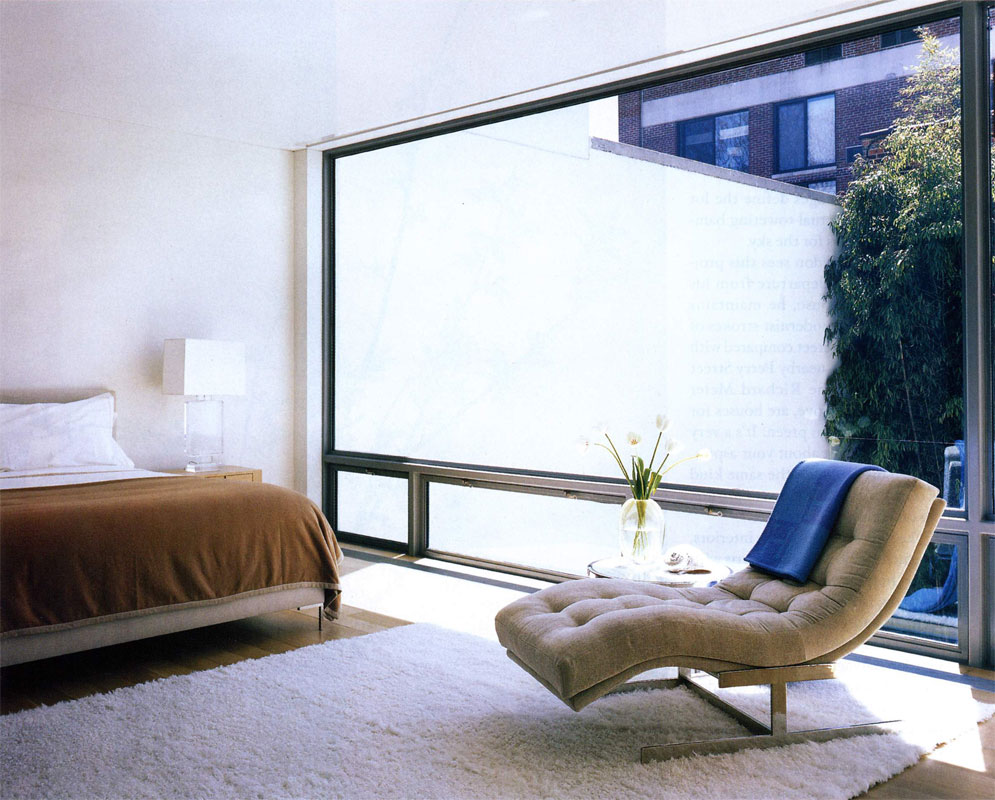 In the master bedroom, a vintage chaise is a curvaceous counterpoint to the custom bed and Arial lamp in Lucite from Capitol Furnishings, NYC. Custom Kalgan Lamb rug by Ira Brown Collection, Mamaroneck, NY.