For the Long View by Patricia Poore – Early Homes, Fall–Winter 2014

This new house was planned around a collection of rugs and furniture passed down for five generations.

Believe it or not, this one is actually a “new old house” in the hills of western Massachusetts. Chip, the owner, developed plans for the Georgian-style dwelling with McKie Wing Roth Jr., a well-known designer of reproduction homes who passed away in 2012. “I liked Roth’s body of work — and we worked together on this design for over a year, mostly through photographs and email,” Chip explains. “We created spaces around my inherited rugs and furniture. I did meet him once, in person, in Maine.” 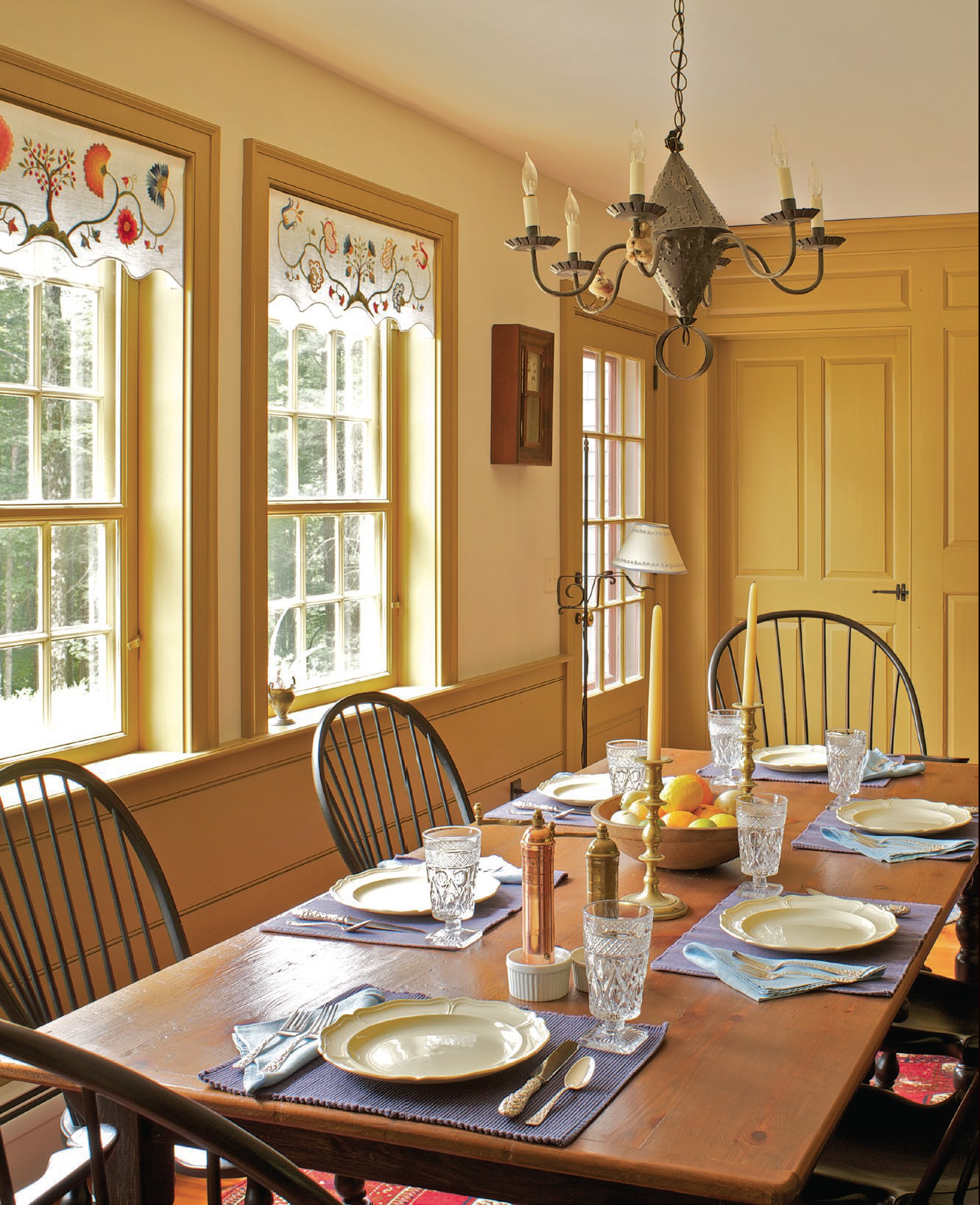 The plans for the new old house were developed by the owner and McKie Wing Roth Jr., who was a well-known designer of colonial- and Federal-style homes.

The house was built by Victor Morrill Carpentry on land purchased in 2002; actual construction started in 2005 and took about two and a half years. The foundation hole had to be blasted, which yielded many tons of large, flat Goshen stone. The stone was used for exterior steps, retaining walls, walkways, patios, and two fireplace hearths. (The house has six working fireplaces.)

Authenticity comes in great part from the period-accurate windows and doors, all made by Architectural Components of Montague, Massachusetts. Company owner Chuck Bellinger says of his client: “He was an absolute delight — knowledgeable, relaxed, and appreciative of the efforts of all the tradespeople.” Bellinger helped detail the windows and doors. “Chip himself knows the terminology of 18th-century houses; he trusted me to get the details right,” Bellinger says.

The windows and doors are based on traditional Connecticut River Valley domestic architecture. Bellinger’s company is just across the river from Historic Deerfield, “a treasure trove,” Bellinger says. Windows are of clear Eastern white pine selected to reduce or eliminate the rot-prone sapwood. The 18th-century plank frame windows have reproduction sash; the Georgian-era muntins are 1″ wide with an ovolo profile. Wood-frame storm sash were fitted on the inside — easy to install and remove seasonally.

Exterior doors were built with pattern-grade South American mahogany, which is stable and naturally rot-resistant. The front entry features a pair of narrow six-panel doors with an eight-light transom. The surround is simple yet elegant with plain pilasters and an ogee crown.

The foursquare plan with a center hall is typical. The living room is on the right, den and dining room on the left. Beyond the dining room is the kitchen ell. Doors on the first floor are slightly wider than standard for accessibility. 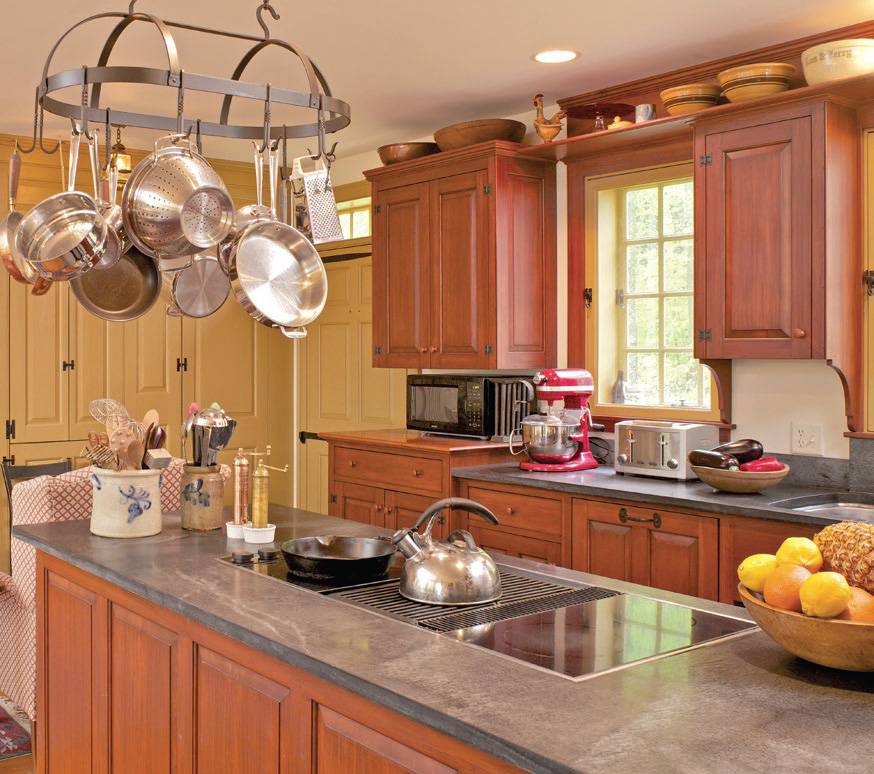 An island separates the working kitchen from an informal dining area with a board wainscot. The Kennebec Company built Georgian-style raised-panel cabinets of hand-planed pine in the ‘Grover Tavern’ finish. The stone countertop is a New England schist with a softly honed satin finish, not a high polish.

The owner was already familiar with the Kennebec Company and had visited their showroom in Bath, Maine, where he picked a style for his new kitchen. “Victor and I changed the layout from Roth’s initial plans, which he’d based on my earlier request,” Chip says. “Kennebec sent one of their designers; she came to the house when it was merely stud walls, set up a drafting table, and drew the cabinet layouts right here. When the cabinets arrived, Victor said they fit perfectly.”

Victor Morrill also found the wall of 1700s salvaged paneling and modified it for use in this room. The paneled wall is part old, part new (made with hand tools).

Flooring is slate tile in the work area and wide pine in the rest of the room. Countertops are schist in a satin finish, except for two areas with tiger-maple tops. For practical reasons (and because this is not a historic house), the dishwasher is the only appliance that is hidden.

Inside, the den is paneled in cherry wood, much of which came from the building site. “The wood was handscraped, not sanded,” Chip says. Barbara and Erik Schutz of Sheffield, Massachusetts, did the finish work.

Window valances in the kitchen and den were made by hand by Kathleen Smith of Textile Reproductions, who mixes her own vegetable dyes for the yarn she uses in her crewelwork. Chip found her after reading about a project she was overseeing for Historic Deerfield.

The house has become a place for friends to assemble — fellow students from a small Quaker school in Pennsylvania, from college and law school. Last summer, Chip hosted friends from England, France, and the Netherlands. The house, filled with history and a legacy of family, welcomed them all.

The cherry-paneled den is the cozy center of the house. Figural fireplace tiles representing the four seasons are from the historic Moravian Tile Works in Doylestown, Pennsylvania. 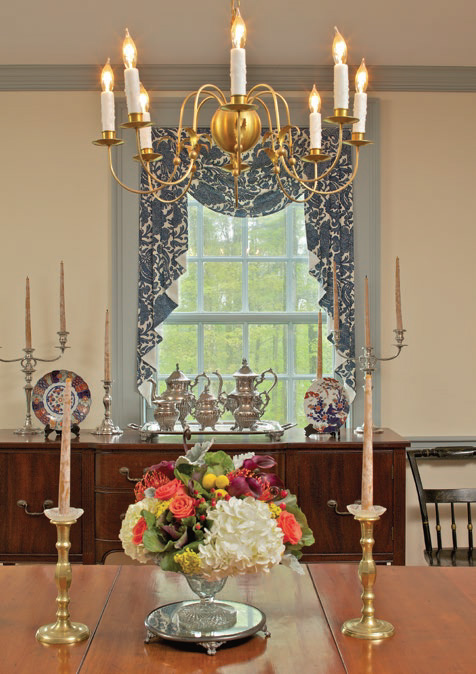 “I’m an only child, and my father was an only child,” says the owner, explaining how so many collected antiques came to him. “The rugs are from my great-grandfather, who lived in Philadelphia, as is the tilt-top tea table in the living room, and the highboy, and much of the bedroom furniture.” In the dining room, an antique cherry table, chest, and corner cupboard were collected by Chip’s grandmother.

The living room’s tall-case clock was made by Christian Bixler of Easton, Pennsylvania, a Revolutionary War soldier, and came down through Chip’s Washington, D.C., grandparents, who bought it in Westfield, Massachusetts, in the late 1930s.

There’s more: a Massachusetts Chippendale chair from the late 1700s, and a painting by Pennsylvania Impressionist W. Elmer Schofield, of the Housatonic River in Kent, Connecticut. It’s on loan to Chip, who boarded at the Kent School. Under the Schofield painting is a mahogany card table ca. 1805–15, passed down through the family since then. 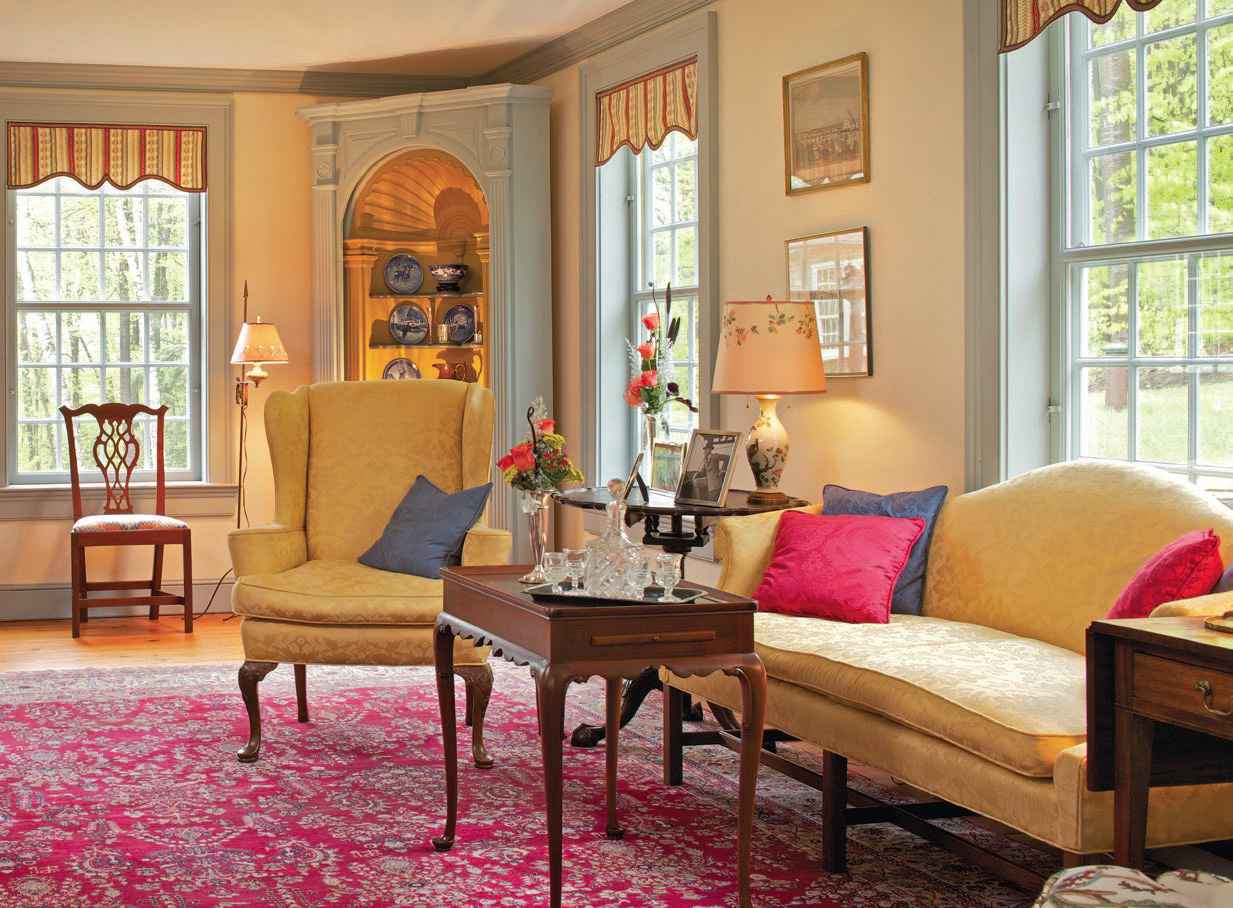 Many of the owner’s antiques are displayed in the living room. The camelback sofa and wing chair have been reupholstered in fabrics selected by Kathleen Smith. The sofa and tea table are reproductions. Architectural woodworker Caroline Sly of Ashfield, Massachusetts, made the carved shell corner cabinet. 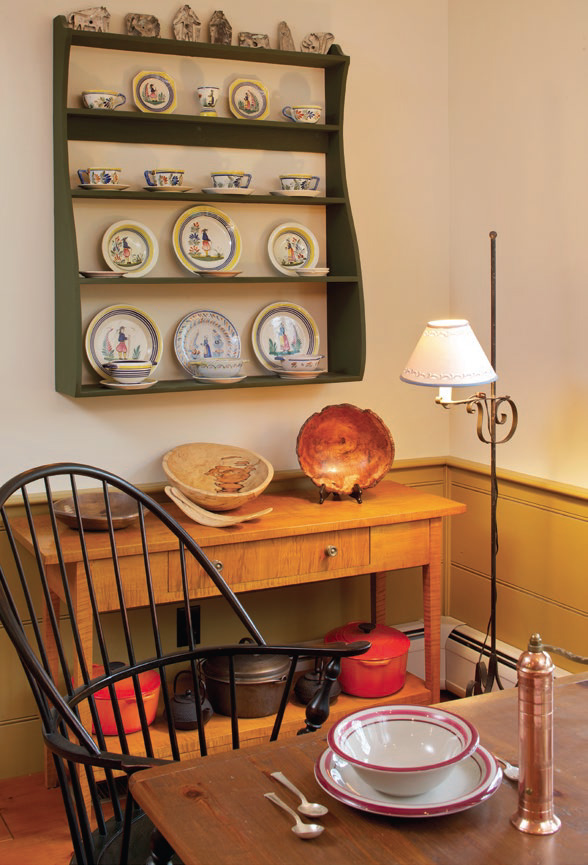 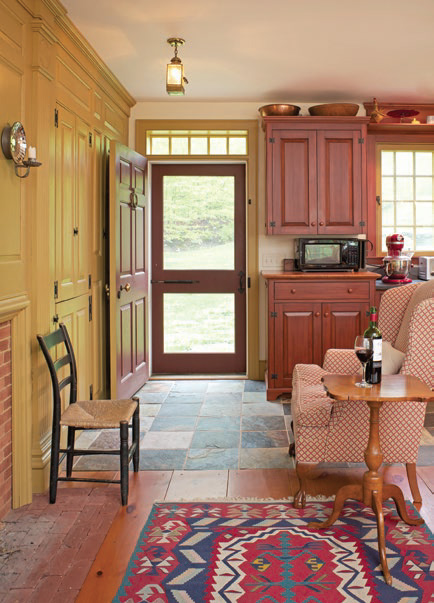 Beyond the dining room is the kitchen ell, and off that a second extension for a mudroom, bath, and bedroom.

Both the working kitchen and the adjacent informal dining area are set against a Georgian paneled fireplace wall, much of it salvaged. 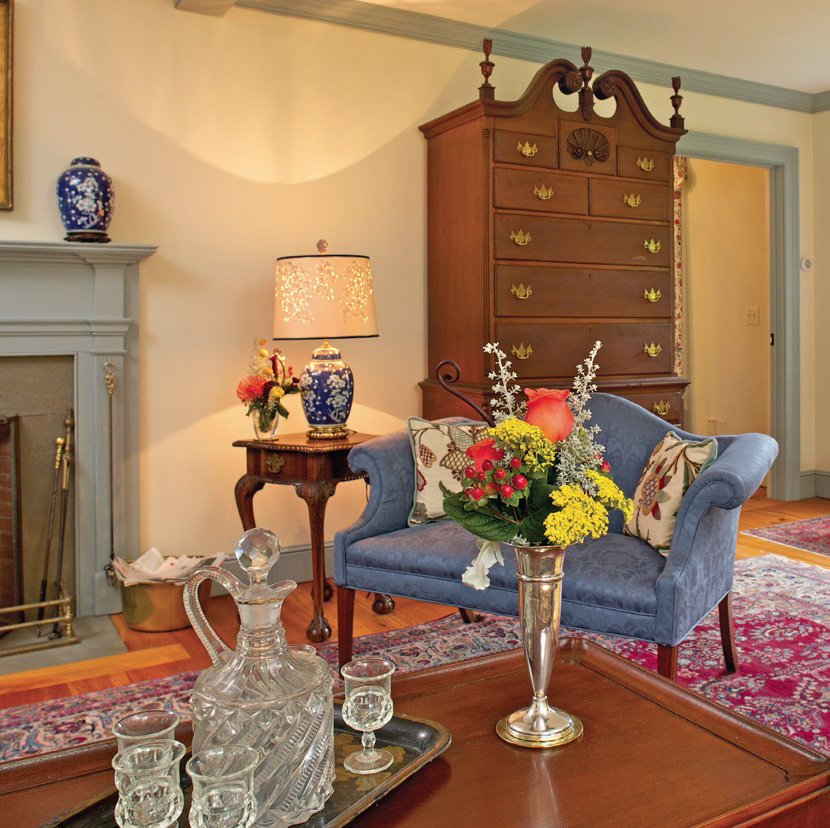 The mantelpiece in the living room was purchased from an antiques dealer in Wiscasset, Maine, and the firebox built to fit.

Stone from the site was used in the landscape; the barn (housing three old Mercedes cars) was designed after a McKie Roth plan and leftover paneling. 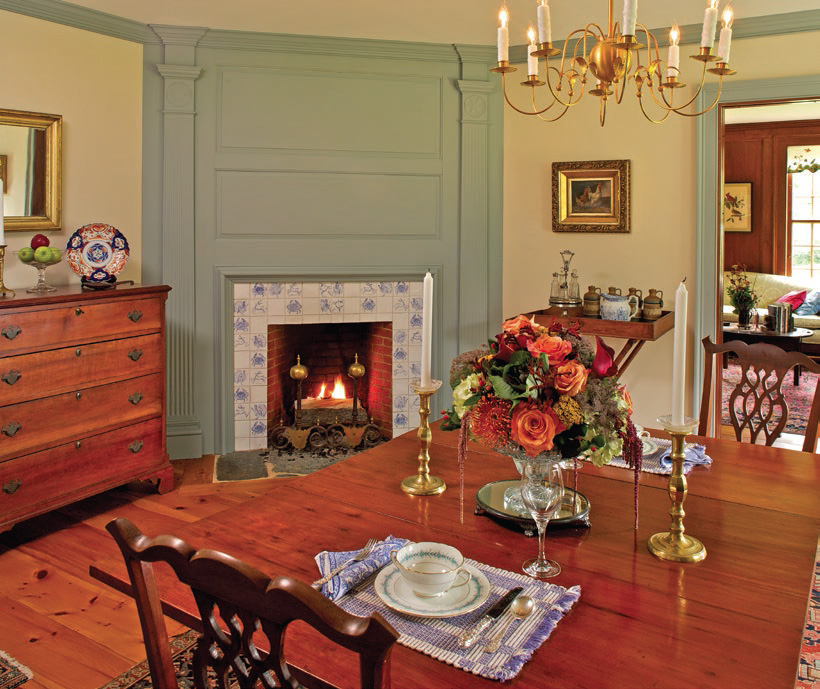 The Delft tile (from New Castle Delft in England) was developed around a theme of air (turkey), sea (crab), and land (deer), all New England consumables. 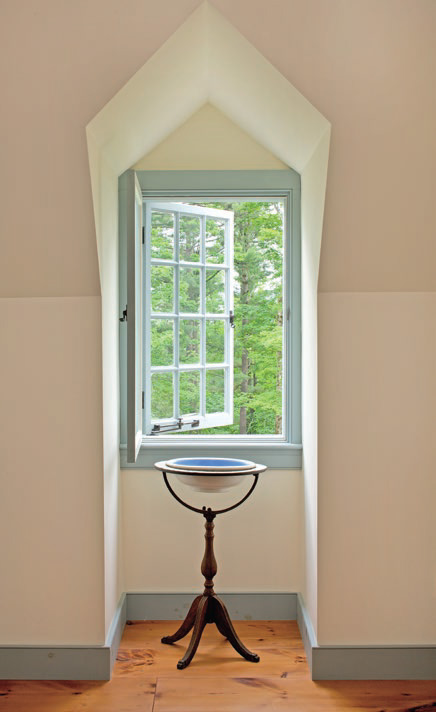 Inside a guest bedroom, the dormer makes a dramatic play of light and shadow. The washbowl sits on an antique globe base.