The new house’s Queen Anne-style features include a steeply pitched slate roof, a mix of brick, clapboard, and shingle siding, and a (right) rounded tower. Custom woodwork and a plan true to Queen Anne style give a brand-new house the old-fashioned character its homeowners cherish.

When it comes to building a house, there’s only one mantra to remember: plan, plan, and plan. And that’s just what Mickey and Jackie Herbert did. Having lived in a Victorian-style house for 10 years, the Herberts knew they loved that architectural style. But their needs had changed over the years. So when they purchased six waterfront acres in Southport, Connecticut, and started envisioning the house they would build there, they found themselves taking stock of their family lifestyle. With two young sons, ages 8 and 9, and three older children from Mickey’s previous marriage, they needed bedrooms placed strategically throughout the house. They also considered the possibility that their own parents might need to move in with them. And although their previous house had an open kitchen/family room—essential when toddlers are in the house—they didn’t need that feature in the floor plan for the new house.

The stunning entry is a showplace of custom work rendered in quarter-sawn oak: paneling, arch, double stairway, and floors. The dining room, directly ahead through the arch, can be closed off with pocket doors.

With function assessed, they moved on to form. “I love Victorian architecture,” says Jackie, who mentions a trip to the Inn at Shelburne Farms, an 1888 Queen Anne-style estate on Vermont’s Lake Champlain, as pivotal. The Herberts knew they wanted many Queen Anne features, such as corbelled stone chimneys and turrets on the exterior, a grand entry, and formal public rooms for the interior.

With a scrapbook of ideas culled over the years from books and magazines, (“it was about a foot thick,” laughs Jackie), the Herberts met with Southport architect Jack Franzen and started turning their dreams into reality. The result: a 17,000-square-foot house with 10 bedrooms, 13 bathrooms, formal and informal parlors, a grand foyer with a double stairway, and such modern amenities as an exercise room and a home theater.

Architect Franzen incorporated classic elements of the style for the exterior: a steeply pitched roof, cross gables, turrets, half-timber detailing, corbelled chimneys, turned-wood columns, and a sweeping veranda overlooking Long Island Sound. “Queen Anne houses typically used many different materials,” says Franzen, and the Herbert house does the same. The first floor is clad in brick, the upper floors in clapboard and shingles; the roof is slate. The rounded tower on the waterfront side is a quintessential example of the mix of elements.

At the tower’s ground level stands the veranda, with its turned-wood railing and beadboard ceiling; the second floor of the tower is a small porch (off the master bedroom) with a kneewall clad in clapboards; and the uppermost portion of the tower has a shingled base capped by a curved row of windows and a slate roof. “The view from those tower windows is the most magnificent view in the house,” says Mickey, whose home office and exercise rooms occupy the top.

Franzen and the Herberts chose authentic Victorian colors for the exterior. “People mistakenly think Queen Anne houses were white because so many have been repainted that way,” says Franzen. “But earth tones were more typical.” Window trim, porch posts, columns, and railings are painted forest green, while clapboards are brick red, and gable fronts are mustard. 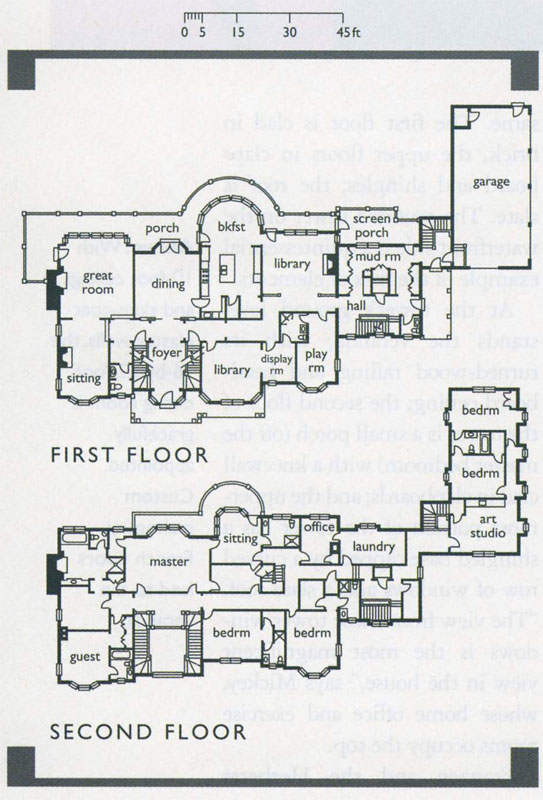 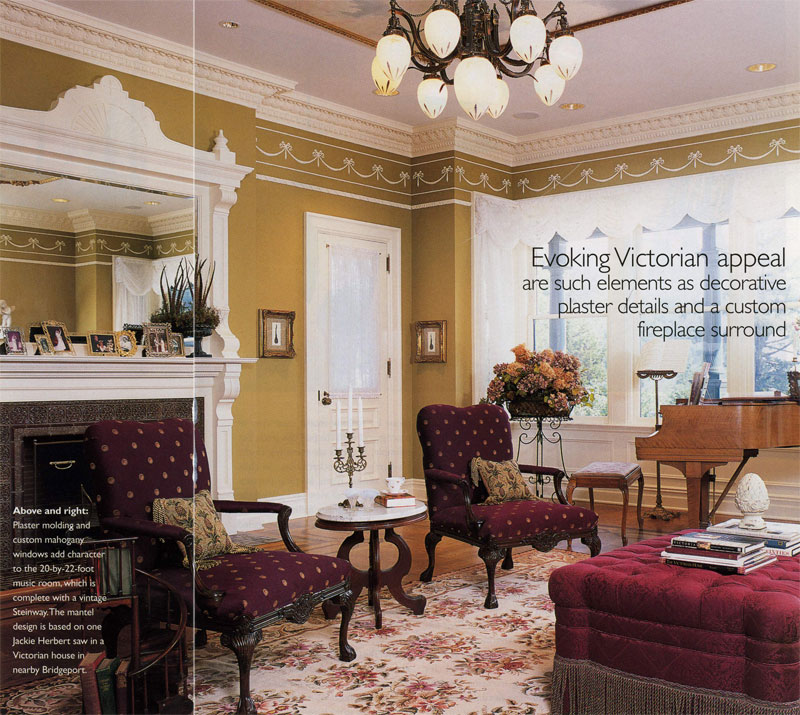 One step inside the front door gives immediate proof that the Victorian styling extends indoors as well. Here, ]ackie got the grand entry she had long wanted. A double stairway of quartersawn oak ascends from the foyer, with a turned balustrade dazzling the eye all the way up to the second floor landing. An impressive arch, trimmed in quartersawn oak, forms the doorway from the foyer to the first-floor hallway and dining room ahead. Floors in the foyer are also quartersawn oak, with an 18-inch border laid in a herringbone pattern. The Herberts use the stunning space as a reception room for holiday gatherings and other events relating to Mickey’s ownership of the Bridgeport Bluefish, a nearby professional baseball team.

The plan of the entire first floor follows Queen Anne conventions: A formal dining room and two parlors provide space for entertaining, whether it’s dinner for 10 or a reception for 100. These areas also have flexibility built in by way of pocket doors, a Victorian technique for making rooms more cozy or more grand with the pull of a latch. For example, if guests are mingling in the Herbert’s foyer, pocket doors can close off the dining room, keeping preparations there out of view and giving the foyer a more intimate feeling. 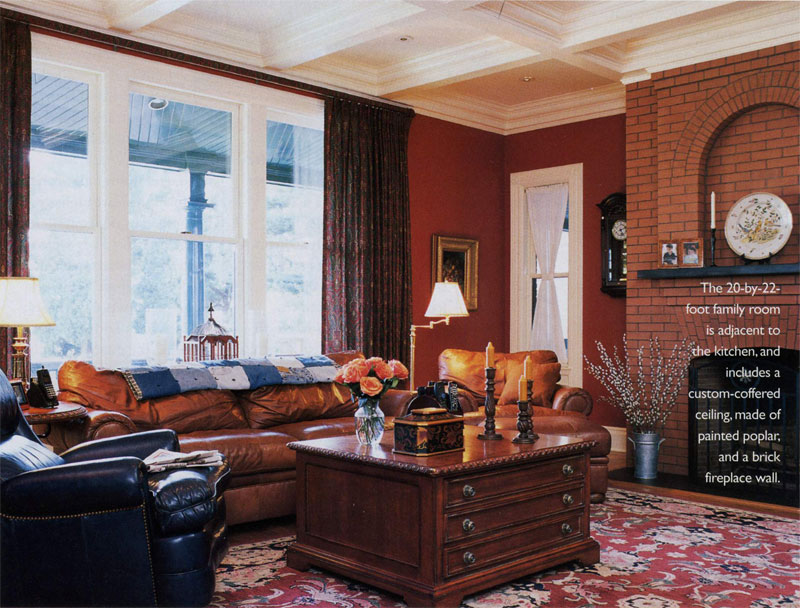 The 20-by-22-foot family room is adjacent to the kitchen, and includes a custom-coffered ceiling, made of painted poplar, and a brick fireplace wall.

Careful consideration of the family’s needs guided the placement of the bedrooms. Rooms for guests, older siblings, and in-laws are placed throughout the third floor, basement, and above the garage. The master bedroom and bath occupy the waterfront side of the second floor, with children’s rooms nearby but facing the front yard. The basement can function as its own hideaway, thanks to a kitchen, game room, and laundry area. The basement is also the location of the home theater; a room that comfortably seats eight to 10 people.

In a nod to the era that made porch living an art, a veranda lines the waterfront side of the house, with custom mahogany French doors leading to it from the dining room, living room, family room, and kitchen. The 10-foot-deep porch has mahogany floors, a painted green ceiling, and turned-wood railing. Here, perhaps more than any other place in the house, one senses the spirit of the Victorian age, a time when functional rooms were rendered in splendid style. For the Herberts and their new home, the era lives on.

Between 1800 and 1910, the architectural style know as Queen Anne flourished. It received its name from a group of 19th-century British architects who were alluding to the British queen who reigned from 1702-1714, but the style actually borrows more from earlier medieval times. Existing examples of Queen Anne houses throughout this country can be found along the water in such summer enclaves as Newport, Rhode Island, and Mackinac Island, Michigan, as well as in such western cities as Boulder, Colorado, and San Francisco. Key elements of the style include:

When architect Jack Franzen set out to create a modern-day, Queen Anne-style house for Jackie and Mickey Herbert, he knew that custom woodwork would be the key to the finished product. Nowhere is that wisdom more apparent than in the grand entry foyer, with its quartersawn oak stairway, paneling and floors, and its handsome oak door. Here’s a breakdown of the custom woodwork elements that went into the house: 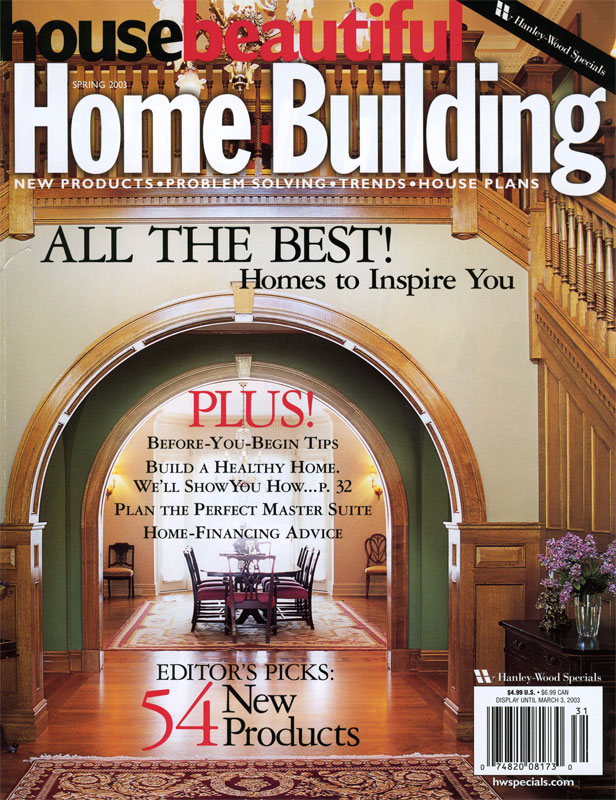 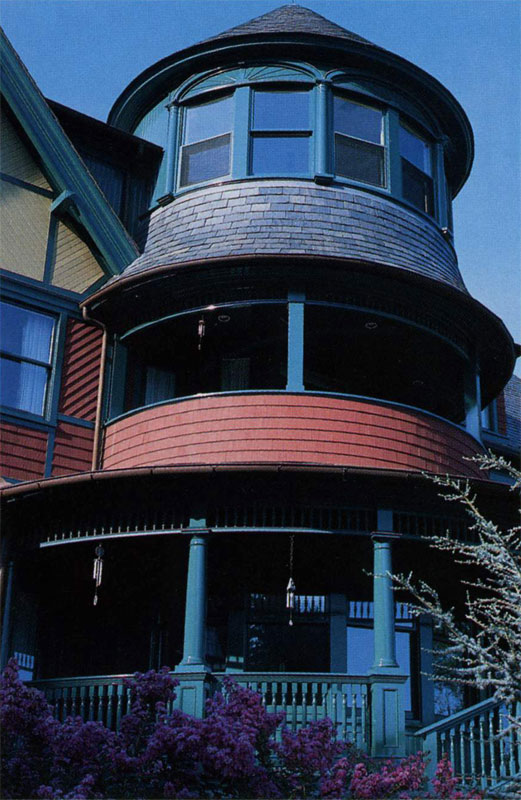 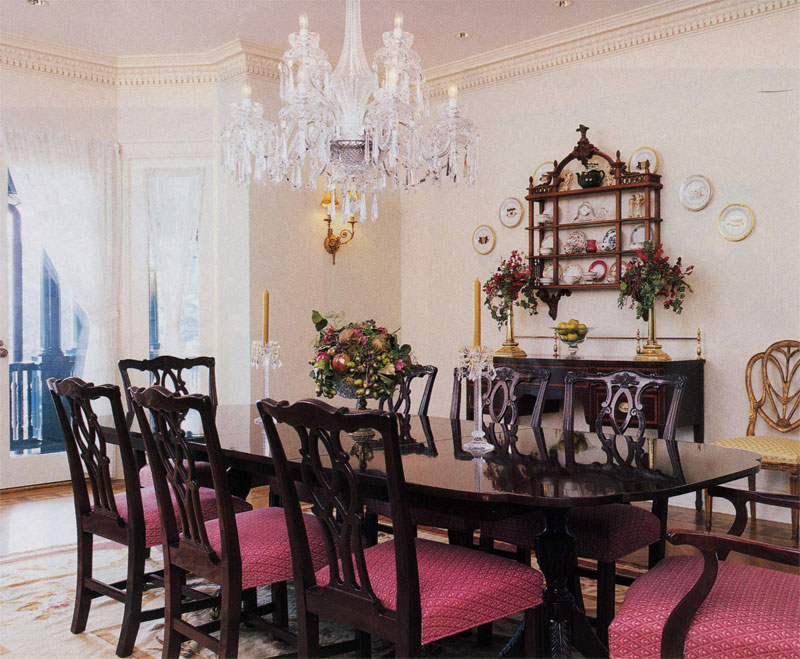 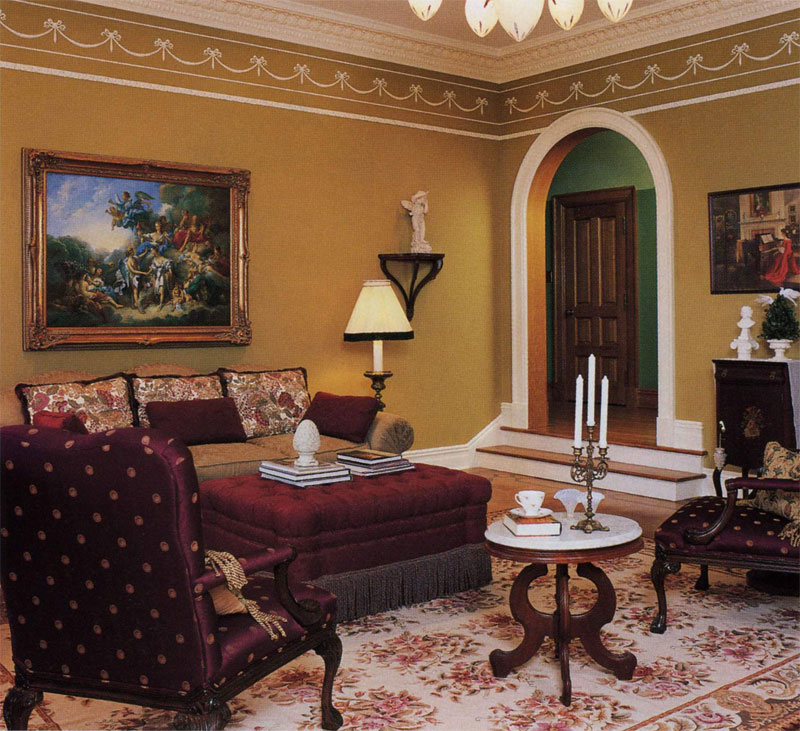 Plaster moulding and custom mahogany windows add character to the 20-by-22-foot music room, which is complete with a vintage Steinway. The mantel design is based on one Jackie Herbert saw in a Victoran house in nearby Bridgeport. 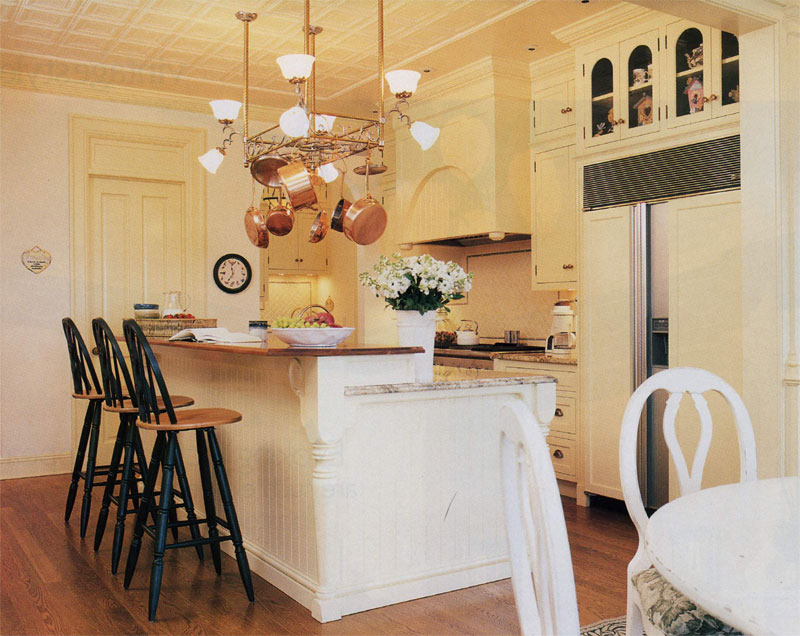 The bead board-paneled island has a stone work surface and a raised wood snack counter. 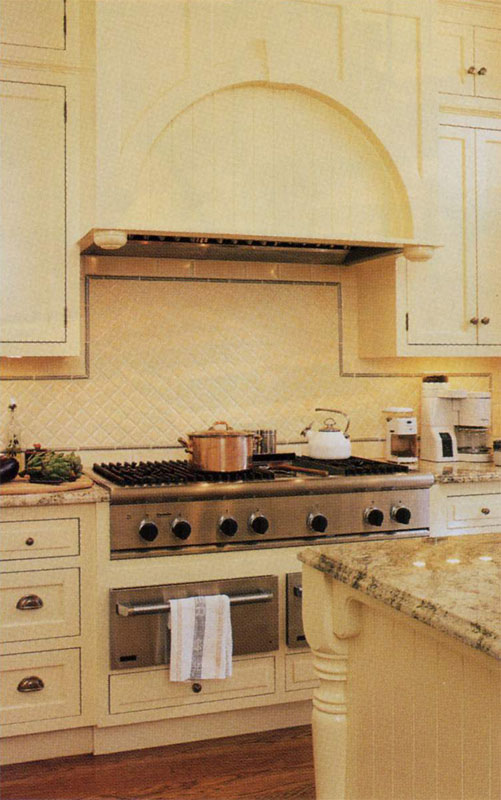 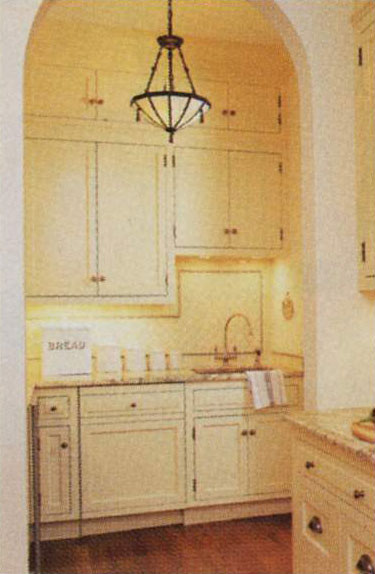 An arched doorway leads to the butler’s pantry. 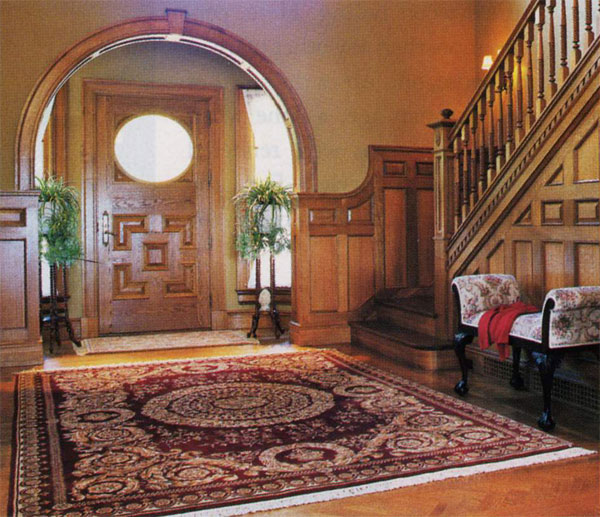 The well lit foyer is enhanced with rich wood tones.