A Kitchen for an Antique by Patricia Poore – Early Homes, Spring-Summer 2015

An Eccentric Plan Resulted in a Workable and Beautiful Space.

OVER THE PAST 27 YEARS, Janet and Jim Laverdiere have, with the help of restoration experts, restored nine homes of their own while raising a family. Jim was running his manufacturing business (Kleenline Corp.), but there was always a house project going on. Jim sold his company in 2013 and, after buying the Homan House shown here, decided to turn his hobby into a business. Fine Period Homes was founded in 2014. The company of highly skilled tradespeople selectively chooses important or endangered houses to restore and bring to market. 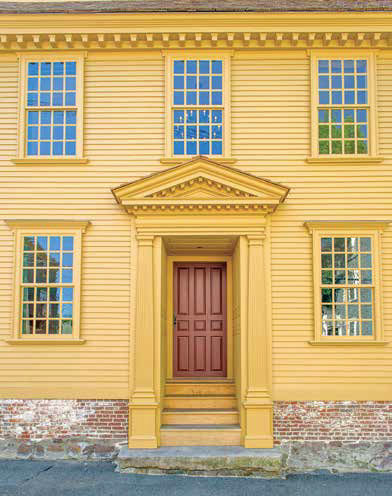 The front entry long ago was removed to make room for a trolley line. Correct in proportion and details, the new inset design is based on the entry of the General John Glover House. The builder was Nat Emerson. Paint color is ‘Blair House Buff’, custom-mixed by Benjamin Moore from a Colonial Williamsburg color.

Every period architectural detail in this magnificent ca. 1744 Georgian home has been meticulously restored; all 12 original fireplaces—two now in bathrooms—have been preserved. The Homan House in Marblehead, Mass., is the first project of Fine Period Homes, founded by serial restorer Jim Laverdiere to turn his “hobby” of many years into a business.

Every inch of this house on a main street in the old seacoast town needed restoration, repair, or reproduction—from structural members in the roof and basement to fine mouldings. The 12 over 12 windows are new: bench-made and plankframed in mahogany by Architectural Components. Skived cedar clapboards are fastened with forged rosehead nails. Interior walls are plaster over wood lath. Much of the new trim and crown moulding was reproduced using hand planes. 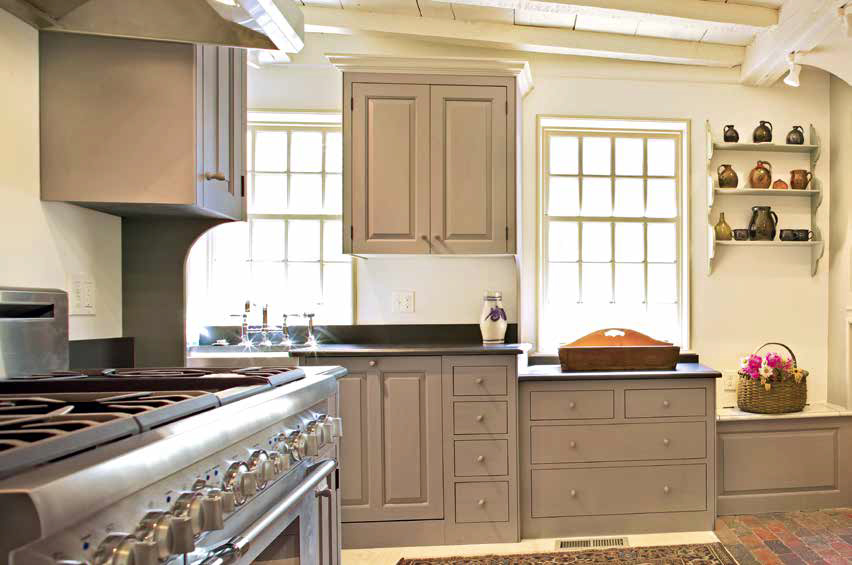 The Kennebec Company kitchen was fitted into an existing addition. opposite: Millwork throughout the house was replicated; paint colors are based on evidence in the house and colors typical of the period.

Fitted into the existing addition, the kitchen has an unusual plan that nevertheless works, as the layout created usage zones. Storage is tucked next to the old hearth, with a cooker opposite and a cleanup area adjacent. A corridor became a practical butler’s pantry next to the dining room; the space terminates in a small powder room. Laverdiere worked closely with The Kennebec Company on the design, asking them to copy the raised-panel profiles from one of the original 18th century doors in the house. (The cabinets are painted in Benjamin Moore’s ‘Alexandria Beige’.) The space includes an abundance of period-appropriate shelving and cupboards. Georgian trim was reproduced for the fireplace surround in the kitchen; another fireplace warms the tiny breakfast room nearby.

Janet and Jim’s previous homes have included an important 1707 house in Massachusetts. They also converted a 1950s Cape Cod house into a period piece, using a dismantled and rebuilt 1690 house as an addition—the small structure thus saved from demolition. The couple also avidly collect late 17th- and early 18th-century decorative arts. Even when they were little, “our kids’ vocabularies included ‘William and Mary highboy’ and ‘English delft’,” Janet laughs.

“When we take on a restoration, we strive to replicate or, in fact, surpass the level of quality the original craftsmen attained,” Jim says. His intention is to bring back antique houses using only time-tested materials and techniques. “I restored a 15,000-square-foot manufactory 15 years ago,” Jim explains; budget constraints had forced him to spec manufactured whitepine windows. “Within five years,” he reports, “their sills had to be replaced because of the poor quality of the pine. That’s true today for many manufactured windows.” 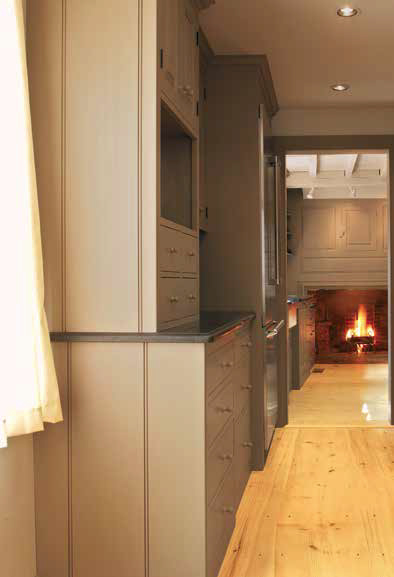 Unique to this antique house, the new kitchen fits well because it was sited within the existing addition, and because its handsome period-inspired cabinets were custom fit to the space. 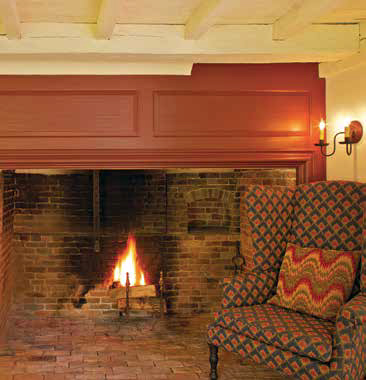 In the rear of the main house block, the original kitchen or keeping room has been recast as a sitting room. 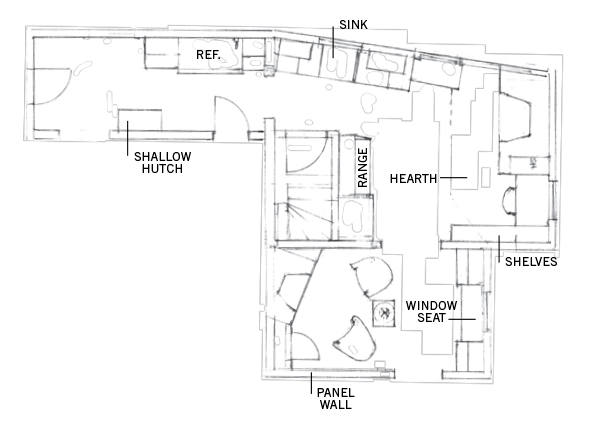 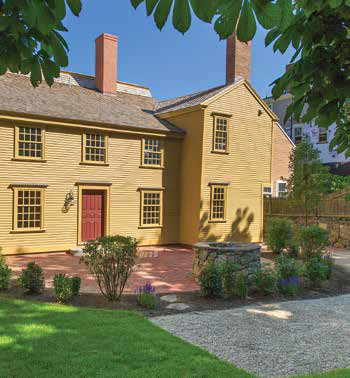 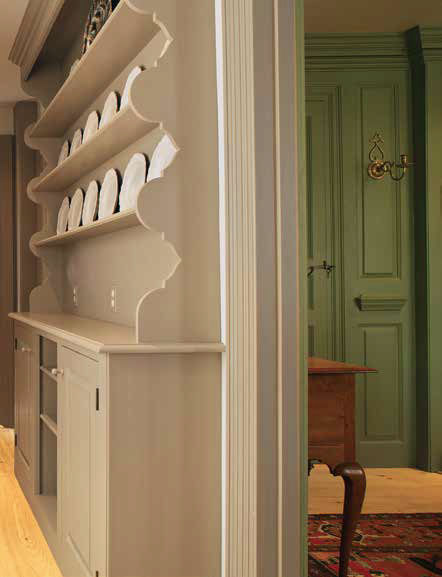 A corridor between the rear kitchen and the front dining room has been outfitted as a butler’s pantry. The large North Shore dresser reproduces one in a period house in Cambridge. Its decorative details make it a unique yet historic feature. 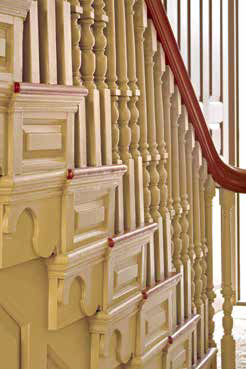 Five missing or broken balusters were reproduced in the traditional way on a lathe by Nat Emerson. 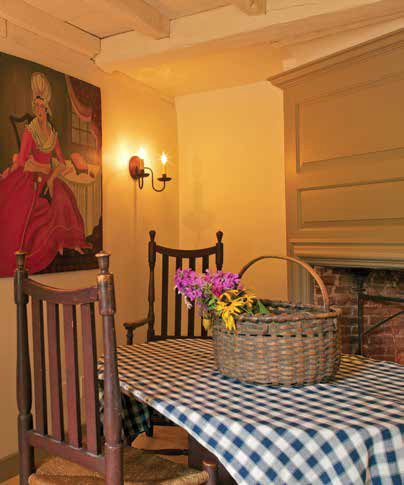 A tiny room between the sitting room and kitchen addition makes a cozy breakfast nook.