Travelers to this part of Martha’s Vineyward might easily think they have stumbled across one of the island’s elegant old vacation homes sitting on a slight hill overlooking the water. The gambrel roof, the row of dormer windows, and the shady front porch all recall the leisurely styles of a century ago. But, in fact, the house is less than two years old, owned by a family of four that spends most of every summer on Martha’s Vineyard. Snug and sunny, the house is rich with graceful architectural details without sacrificing any of the comforts of a contemporary beach house. “They had a vision of a 1920s-style seaside hoine,” says architect and builder Gerret Conover, who designed the house, “but with a modern wish list.”

When the owners bought the property it included a 1960s-style house that did not particularly suit their needs, but the lovely sweep of view down to the water and the wild, unspoiled landscape surrounding it was too tempting to pass up.

Although not bound by the historic district guidelines that exist in Edgartown, the island’s principal town, the homeowners wanted to build a house that would blend comfortably with existing local architecture. Even more important, they wanted to be sensitive to the fragile ecology of the shoreline, protected under the guidelines of a local conservation district. In order to avoid disturbing the wetlands, the house sits 200 feet away from the water, out of the conservation district boundaries.

The weather is a factor in building any kind of beach house, but with some forethought and a careful selection of materials you can preserve the house without sacrificing style.

Building actually occurred in two phases. The first year, the main house, a nearby swimming pool, and the surrounding landscaping were completed; the next year, a carriage house with two guest bedrooms was built.

Since they knew from the beginning they were going to install separate guest quarters, the homeowners kept the total size of the main house relatively modest—just 4,000 feet—but still plenty large enough for themselves and their two children.

Rooms flow comfortably into each other but large openings without doors provide just a hint of demarcation, which allows rooms to work as individual spaces while still making a single unified sweep. “No matter where you are inside the house you can see through to the other rooms and often further to the outside,” says Conover.

Wide French doors and traditional six-over-six double hung windows let in floods of light; a softly neutral color scheme with an emphasis on glossy white paint and natural wood lets the views outside the uncurtained windows take center stage. The furniture is traditional without being formal, an easy-to-live-with combination of antiques and new pieces. 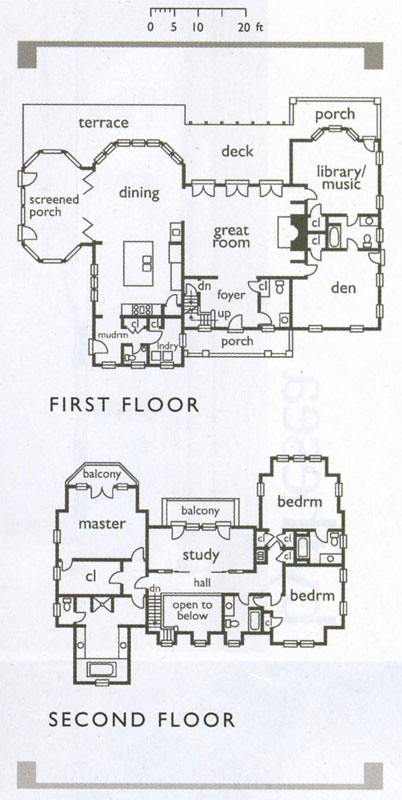 The house owes much of its vintage style to antique architectural details, discovered in salvage yards and antique shops up and down the east coast. Custom molding, inspired by detailing on some of the older pieces, and refinished antique oak flooring add to the sunny house’s timeless feeling.

A massive antique cupboard provided the cue for the kitchen’s handsome millwork. The cupboard was cut in half and installed next to the kitchen window seat, switching halves so that its cut sides are hidden and its two finished ends exposed. In the nearby dining room a handsome corner cupboard was retrofitted as a wet bar; Conover then cleverly picked up the V-groove motif at the back of the cupboard and used it for the molding in the kitchen and dining room.

One of the family’s favorite rooms is the octagonal sun porch reminiscent of an old-fashioned conservatory, just off the dining room; a flagstone terrace beyond the sun porch has space for pots of geraniums and a barbecue grill. The room, lit with a combination of soft valance up-lighting and an iron chandelier, started out as a screened porch with removable glass panels, but the family discovered that glass panels not only gave more all-weather versatility but opened up the spectacular view. “This is a house,” says Conover, “where the view is everything.” 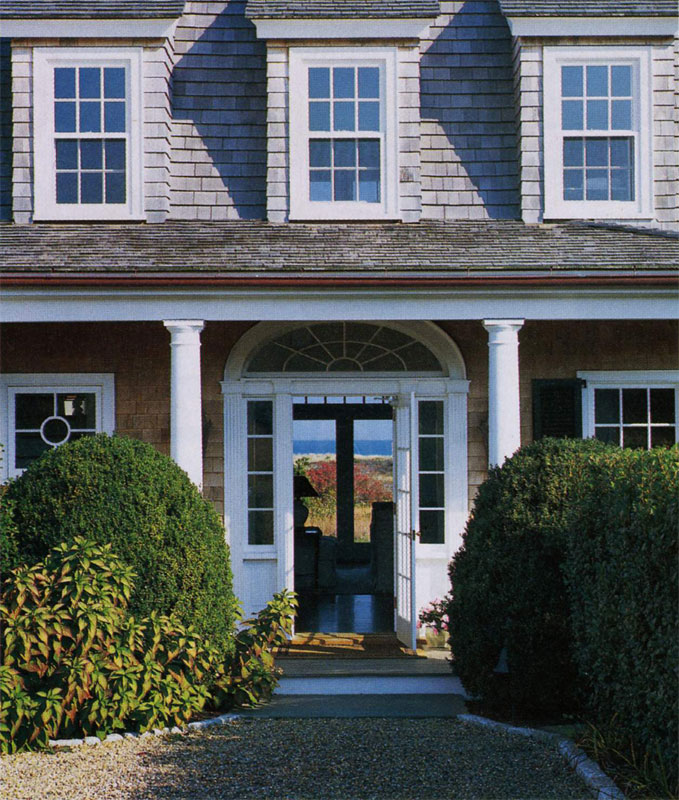 The vintage style of the exterior emphasized with weathered white cedar shingles and painted white trim. A view of the ocean can be captured from the front door. 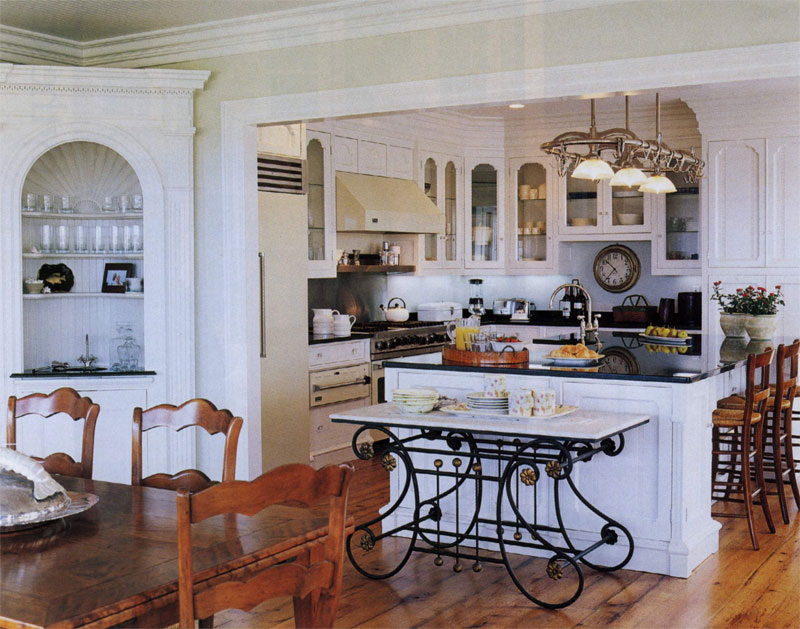 Salvaged architectural pieces and new millwork make a pleasing blend in the sunny open-plan kitchen. The cupboard in the corner of the dining room is an old piece, retrofitted with a wet bar; the lighting fixture over the kitchen’s central island was adapted from an old pot rack. 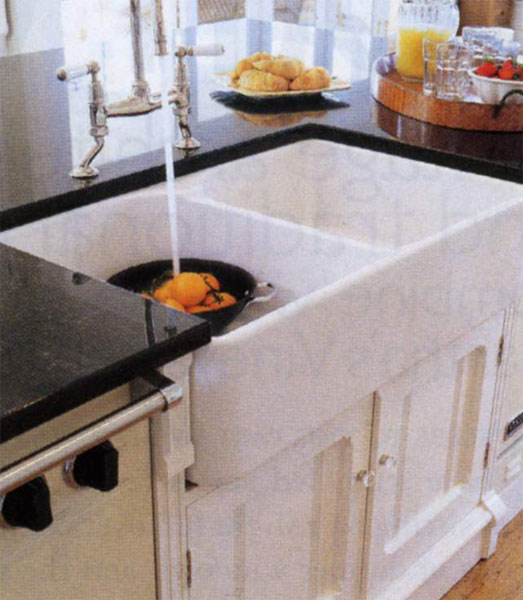 The old-style farnhouse sink is actually a new model. 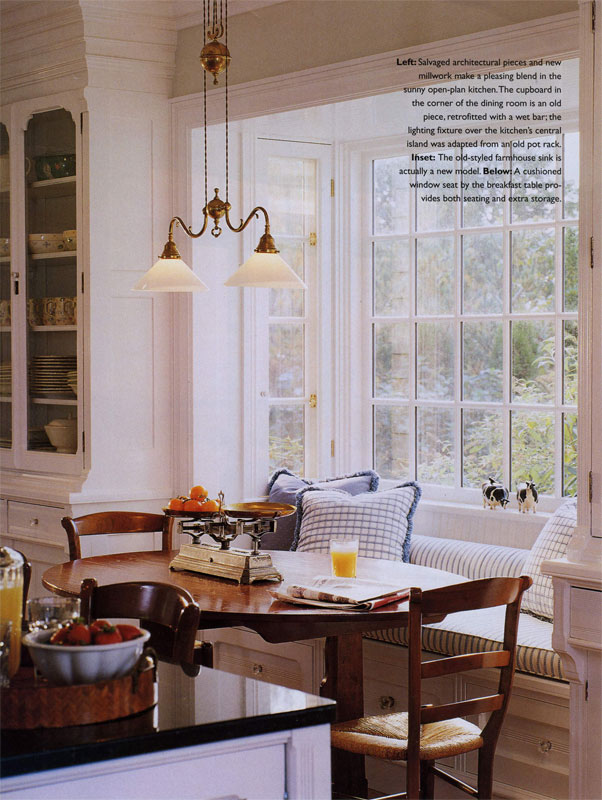 A cushioned window seat by the breakfast table provides both seating and extra storage. 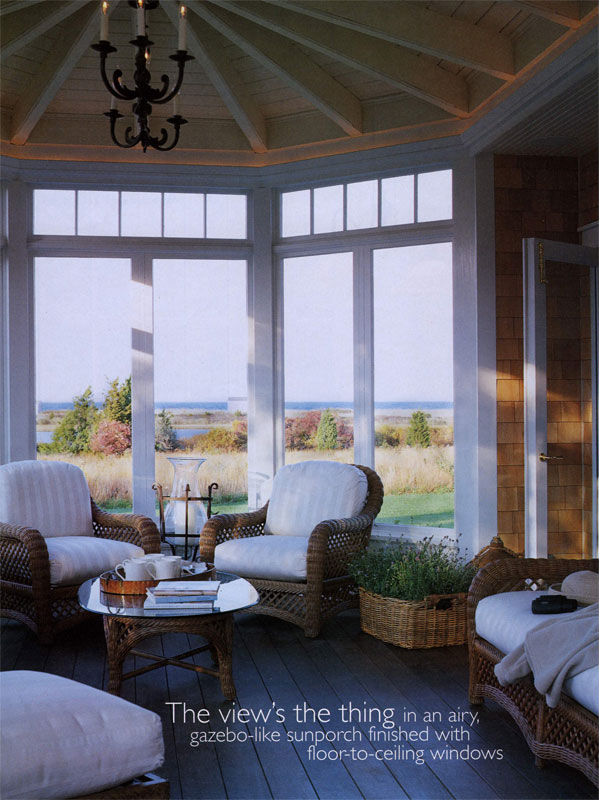 The view’s the thing in an airy, gazebo-like sunporch finished with floor-to-ceiling windows 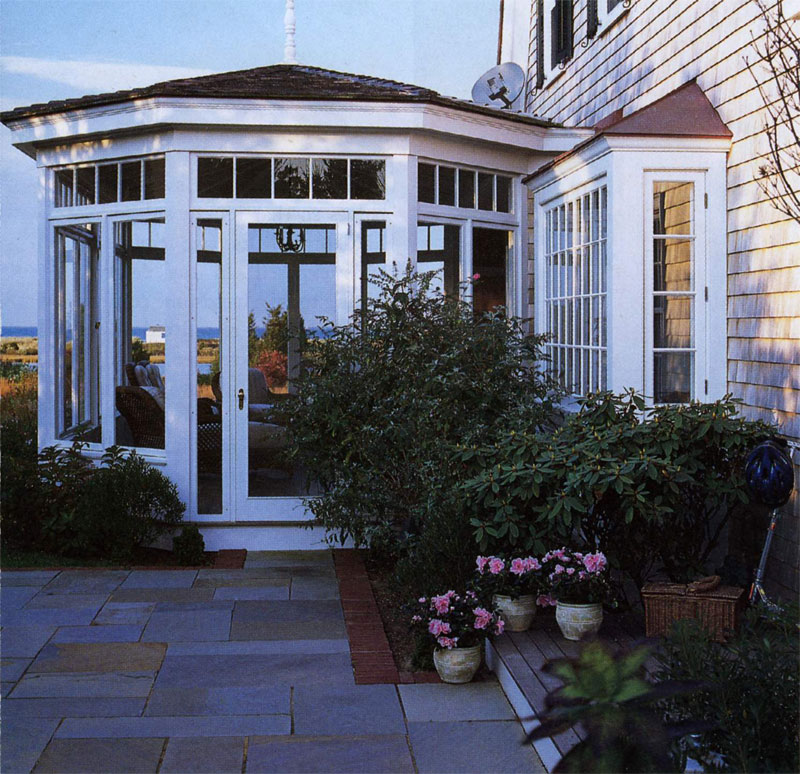 Furnished with comfortable wicker and affording a 180-pius degree view of the ocean, the gazebo-like sunporch off the dining room is a favorite place for sitting. 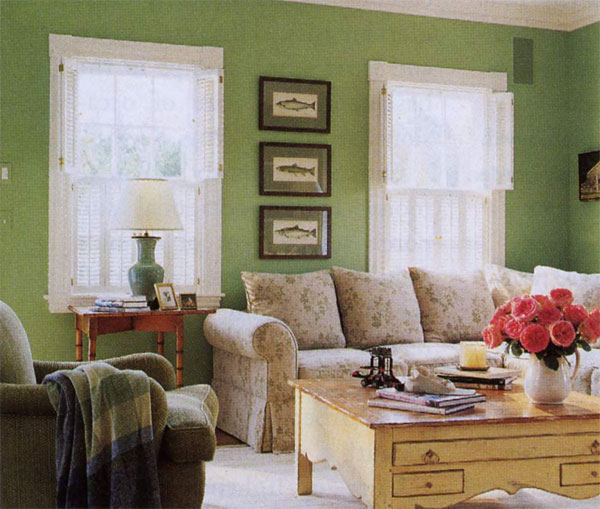 A casual sitting room outfitted with a sink-into sofa and a 50-inch flat-screen TV doubles as the family’s entertainment room. 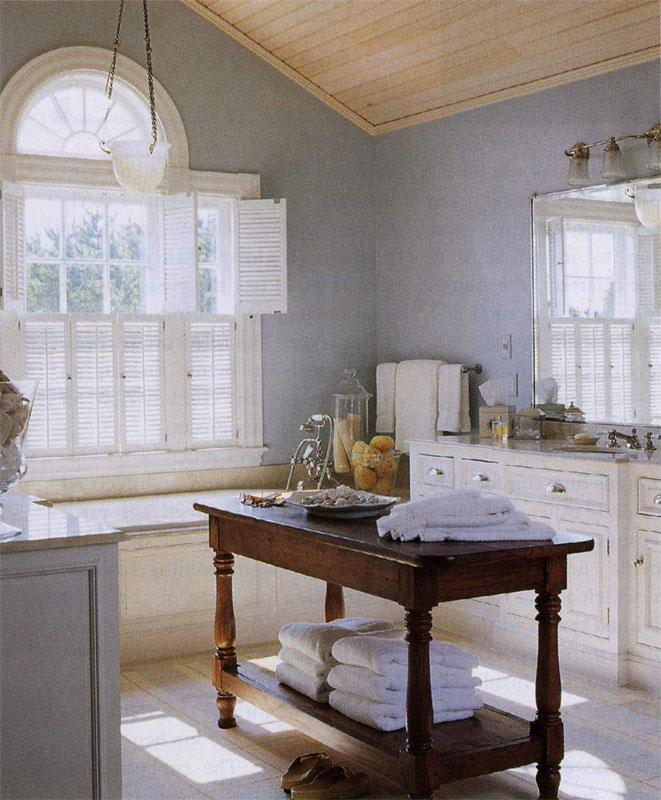 The emphasis is on understated luxury in the master bedroom and bath. The bathroom’s marble tiles are decorated with a mosaic border, thick cotton towels are stacked ready on an antique table. 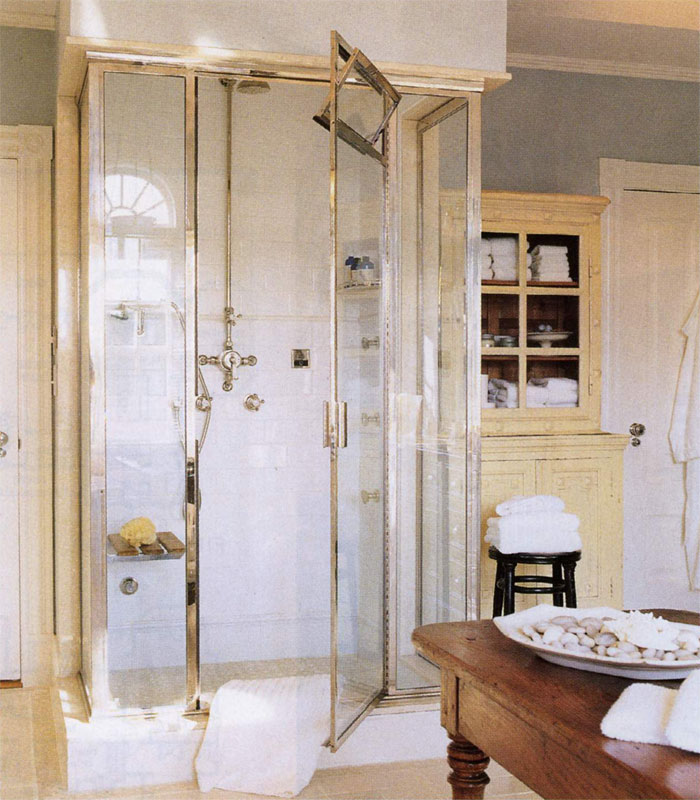 The steam shower has two showerheads and nickel-plated fixtures. 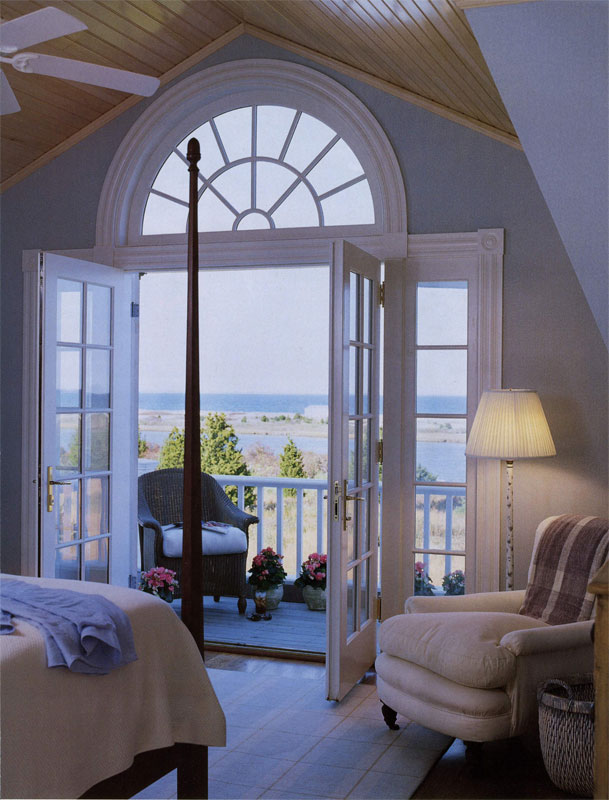