Produced by Donna Paul. Photographs by Maura McEvoy. Written by Fred A. Bernstein.

Retailers may try to convince you that autumn is back-to-school season, but dedicated home lovers know that falling leaves signal a primal urge to refeather the closest available nest. Face it, redecoration is in the air—either heavy (a whole-house transformation) or light (a quick coat of paint and a new frame on a favorite family photo). Popular TV shows suggest that most of us greedily seek easy solutions and instant gratification when upgrading and updating. But the stories on the following pages suggest that some dedicated homeowners are willing to put up with the time, expense and inconvenience of invasive alterations in order to create environments that best express their unique personalities. The homes we feature have been heavily altered, but each one of these renovations is made up of a series of light changes, many of which we can all do in our own homes. So get ready, get set, go reno!—The Editors

Back in the early 1990s, when Jon Platt, a jet-setting theater producer, was offered a chance to help bring Angels in America to Broadway, it took him about a minute to say yes. Ten years later, after an early run-through of Wicked, a musical that reveals the untold back story of the notorious witches of OZ, Platt signed on just as quickly (Wicked is scheduled to open on Broadway in October).

“When you find the right property,” says Platt, “you know it.” The same principal applied to his beach home, about 50 miles south of Boston, where Platt has an apartment. He was looking for a place to dock his sailboat. The property he found had stunning views of Martha’s Vineyard and the Atlantic Ocean and a lawn expansive enough for a pool as well as tennis and basketball courts. Platt made and offer.

The house itself, Platt says, was dark and failed to take advantage of the views. Windows were small, which was typical for New England in the days when glass was taxed by the size and number of the panes. And the original 18th-century saltbox was flanked by—in the words of interior designer Shelley Benjamin—”hideous additions from the 1920s and 1970s.” In fact, Platt says, most of the potential buyers for the house had considered it a teardown.

Platt hired Benjamin, who had designed his apartment in Boston, and architects Brigid Williams and Patrick Hickox (of Hickox Williams Architects in Boston) to oversee the renovation. (Benjamin’s husband, John, served as contractor.) Later, John Powell, a Boston-based lighting designer, was called in to design the fixtures, and Brown Cranna of New York’s Studio Luxe created custom paint colors. “My job,” Platt says, true to his calling, “was to keep the creative team focused.”

Downstairs, window openings were enlarged, and the center stairway moved to the side, so “when you walk in the front door,” Platt says, “you see the light and the views.” For the sake of surprise, he kept the windows on the front of the house small. “You don’t even know the ocean’s out back until you open the front door.” With the front door open, the view takes in an open entry with large glass doors that open onto the beach. “The challenge,” says Hickox, “was to retain the fundamental character of a colonial house but to address the need for light.”

As for decor, the producer, who is currently represented on Broadway by Man of La Mancha, says he wanted “a look that was fresh but wouldn’t undercut the history of the house.” Benjamin reinforced the colonial architecture with antiques, but—to avoid a too-literal evocation of the past—helped Platt select new pieces from future-forward furniture retailers like Pucci in New York City and Repertoire in Boston. “She introduced me to the idea that everything doesn’t need to match.”

The one thing Platt insisted on was that the house have a soft look. The shiniest things in the house, he jokes, are his three Tony awards-two for Angels in America and one for Copenhagen.

“To me,” says Platt, “shiny means glitz. And when I want glitz, I put it on the stage.”

Kitchens are invariably the most difficult rooms to rework, and Platt’s was no exception. His goal was to slip 21st-century appliances into an 18th-century room—without letting it read too “period” or too modern. The formula involved having counters fabricated of stainless steel, but with a brushed surface that gives them a soft look (and, as a bonus, doesn’t show scratches as readily). The edge of the countertops has a slight cantilevered lip, a detail that Shelley Benjamin designed but which, her husband says, was tricky to fabricate. “Bending sheet metal in one direction is easy,” says John Benjamin. “But to bend it in two directions involves cutting, welding and grinding out the welds.”

The kitchen cabinets (styled after the 18th-century cabinets over the dining room fireplace) are painted linen white—the same color, Benjamin says, “as all the woodwork in the house.” For backsplashes, she chose thick slabs of bluestone, which, given their weight, posed installation problems. But they give the place a sense of permanency, says Platt, who likes the material so much, he turned part of his yard into “the world’s only bluestone basketball court.”

The kitchen is really a suite of rooms in which Platt has a choice of places to eat. Some nights, he pulls a wooden chair up to an old French farm table (Shelley had the chairs faux painted to pick up the colors of the walls and cabinets). The nearby dining room is outfitted not for banquets but for intimate dinners in front of the fireplace, with candles burning on an antique Queen Anne dining table surrounded by linen-covered Philippe Starck chairs.

During most of the eight-year renovation period, Platt was on the road; Benjamin and the others e-mailed him photos for approval. But each Memorial Day, the crew cleared out. That way, Platt could spend the summer enjoying the house—and coming up with even more ambitious plans for the next construction season.

“Jon’s thinking was so dynamic,” says his architect, “that as he got to know the house better, he would want to go in directions we hadn’t anticipated.”

Platt says he has half a dozen favorite places in the house, but “nothing beats taking a bath, with a roaring fire on one side and the ocean on the other.” With 200 square feet for the master bathroom, Benjamin installed the tub on an angle and found a graciously proportioned porcelain sink. Like Platt’s best musicals, the sink has legs, which lets light and air flow through the room. A reproduction “satellite” mirror (originally designed by Eileen Gray in the 1920s to be wall-mounted) is installed here as a room divider. Benjamin realized that all it needed was a new back and sleek metal supports. Husband John rose to the challenge. He also built the columns in Platt’s bedroom, which double as a headboard, and the attached night tables. “I didn’t want some big, pompous bed overpowering the architecture,” says Shelley of her preference for built-ins.

But despite his many favorite places, Platt is rarely at home these days. Phoning from San Francisco, he is ecstatic about early reactions to Wicked. It took three years to bring his latest show to Broadway, far less time than it took to complete his house at the beach.

What the Pros Know About Installing Faucets 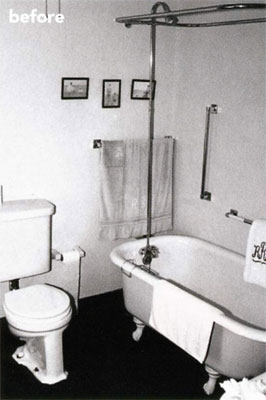 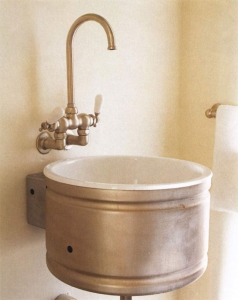 Installing the faucets in the wall, rather than on the sink, saves inches in a small bathroom. It also means, says Shelley Benjamin, that the hot and cold water pipes aren’t visible under cantilevered sinks. Best of all, “the water falls in just the right place,” she says. In a new house, wall-mounted faucets are “no trouble at all,” but, she says, in Platt’s Colonial-era house, getting the plumbing into the wall in just the right place was “very difficult”—for her husband! Benjamin chose a wall-mounted sink in black enamel. But when Platt saw it, he balked. Benjamin suggested nickel-plating the sink, and Platt agreed. 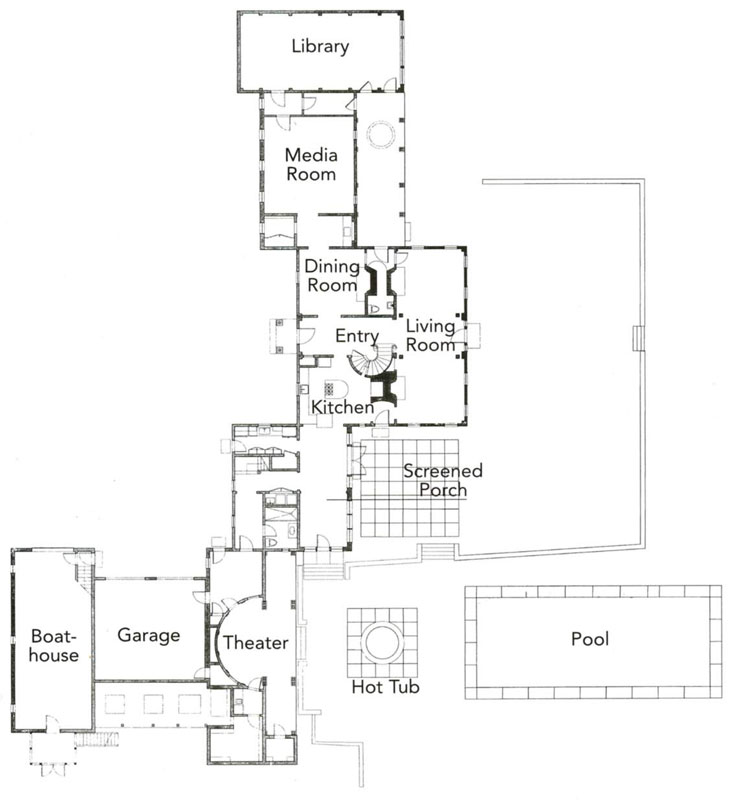 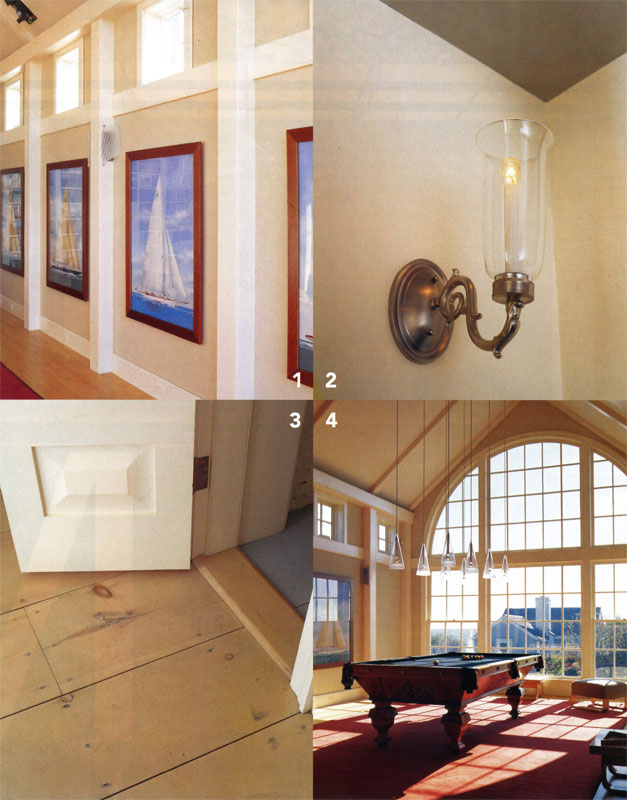 1. Paintings of America’s Cup yachts from the 1930s, which Platt found at a gallery in Paris, hang on the billiard room walls. To bring as much light as possible to the room, without turning their back on the house’s past, the architects created a clerestory of small, square windows, which Benjamin says “are very indicative of old New England architecture.”

2. John Powell of the Boston firm Light Time in Space designed the more than three dozen nickel-plated sconces for the house; the armatures were custom fabricated in Canada. Benjamin, who says she never paints ceilings white, chose silver for the ceiling of the powder room, because “it picks up on the nickel-plated sconce and sink.” She avoided crown moldings, which would have crowded the tiny space.

3. Every door in the house is mahogany, an extravagance now that they’re painted white. Benjamin said it took more than a dozen tries to get the color of the new floorboards to match the originals perfectly.

4. Platt’s billiard room has two focal points: ocean views (the building is Platt’s guesthouse) and an 1880s Brunswick pool table with ebony inlay. Benjamin had the rug made in Tibet. The light fixtures, from Flos, were designed to hang on short cords, but Benjamin had her husband suspend eight of them from the cathedral ceiling in a perfect grid. “Luckily for me,” she says, “he’s an engineer.” 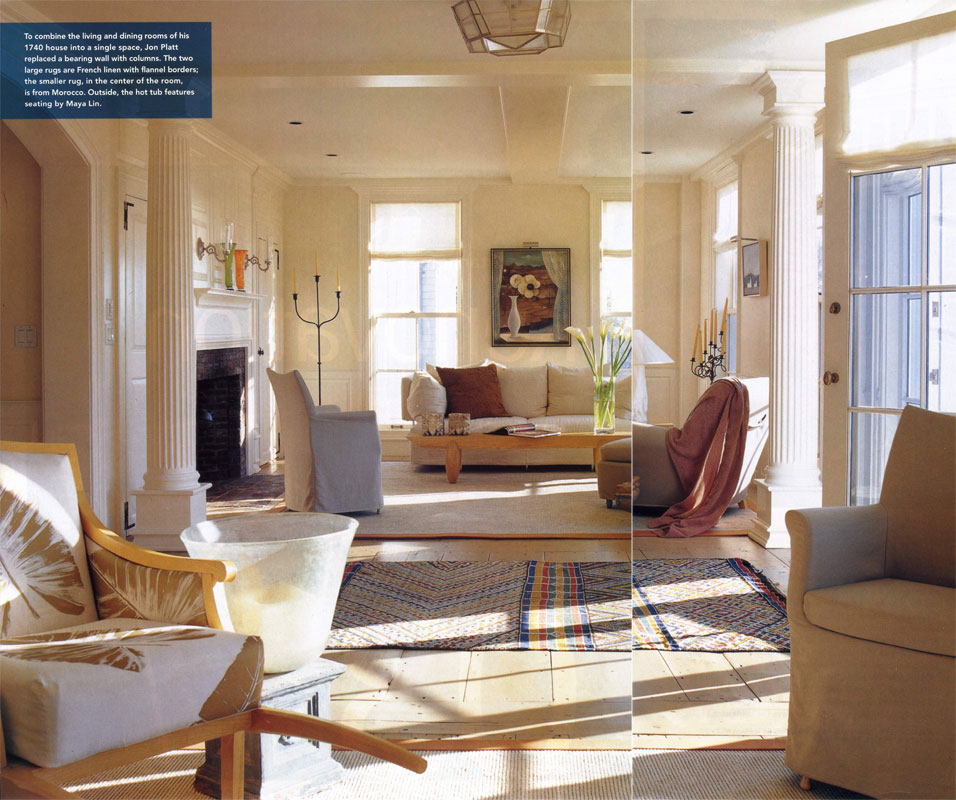 To combine the living and dining rooms of his 1740 house into a single space, Jon Platt replaced a bearing wall with columns. The two large rugs are French linen with flannel borders; the smaller rug, in the center of the room, is from Morocco. Outside, the hot tub features seating by Maya Lin. 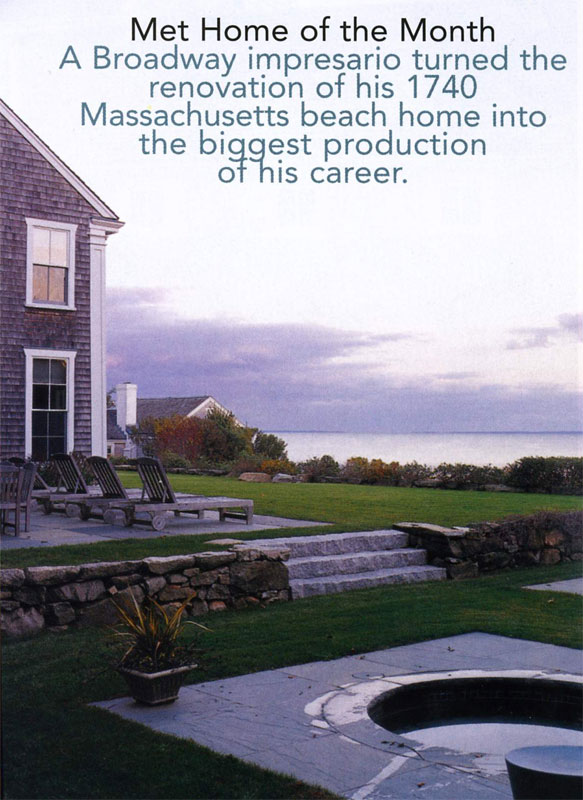 A Broadway impresario turned the renovation of this 1740 Massachusetts beach home into the biggest production of his career. 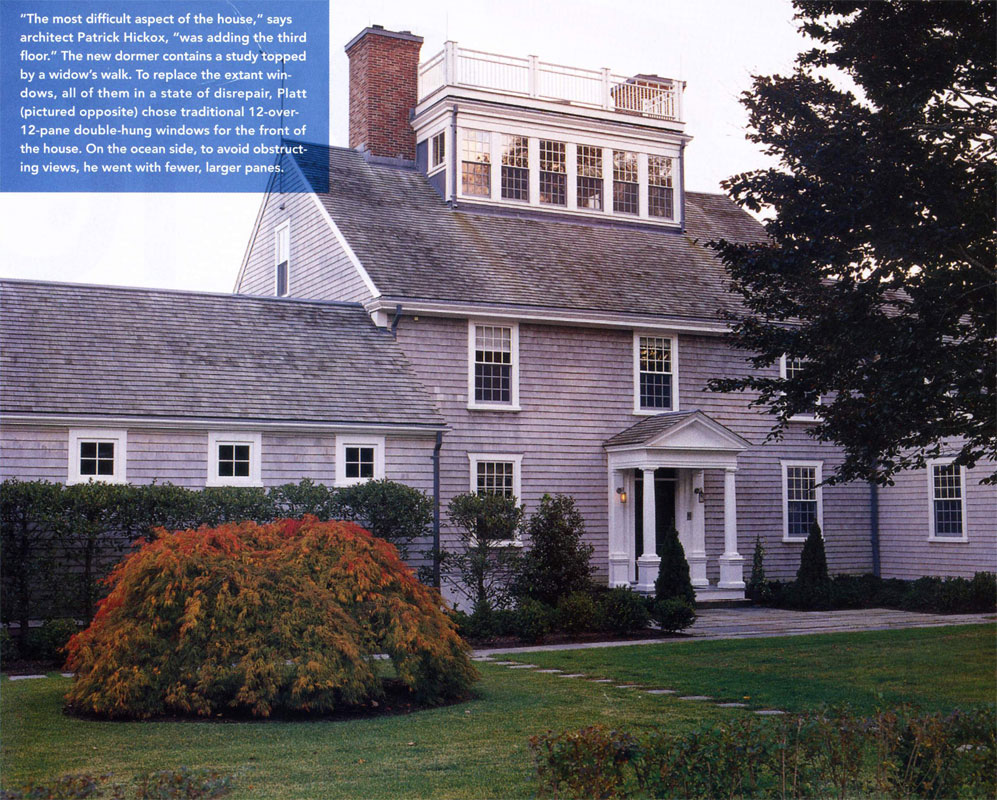 “The most difficult aspect of the house,” says architect Patrick Hickox, “was adding the third floor.” The new dormer contains a study topped by a widow’s walk. To replace the extant windows, all of them in a state of disrepair, Platt (pictured below) chose traditional 12-over-12-pane double-hung windows for the front of the house. On the ocean side, to avoid obstructing views, he went with fewer, larger panes. 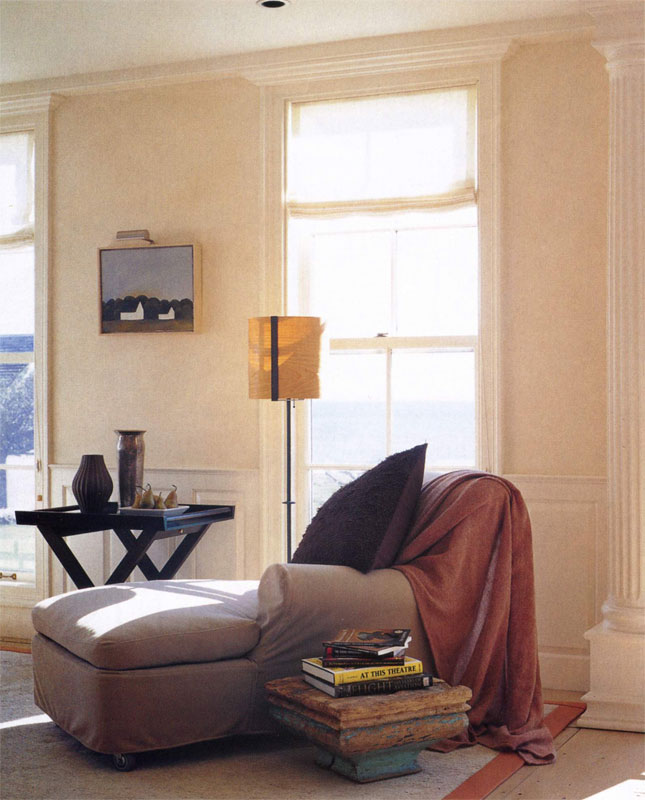 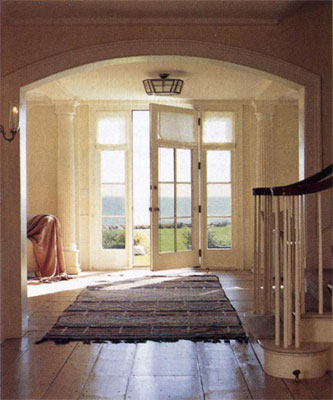 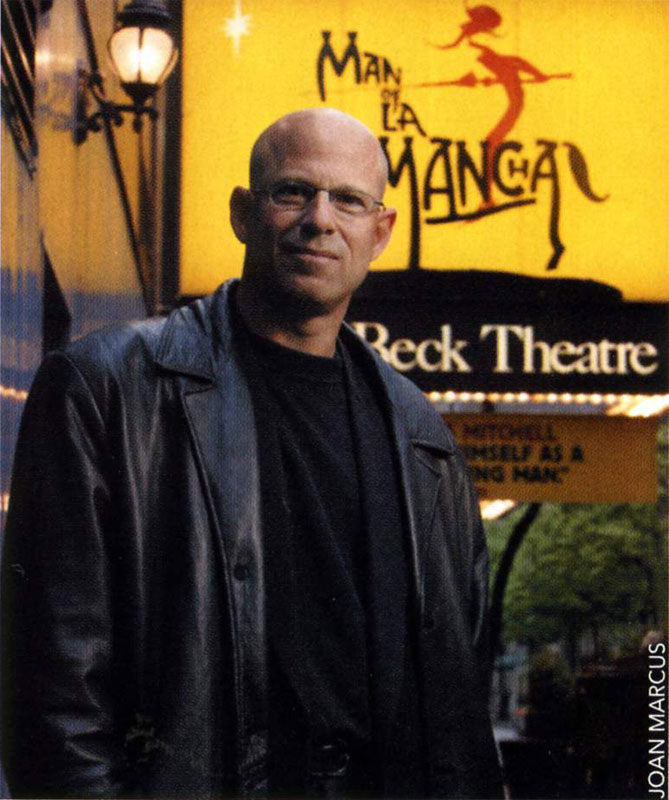 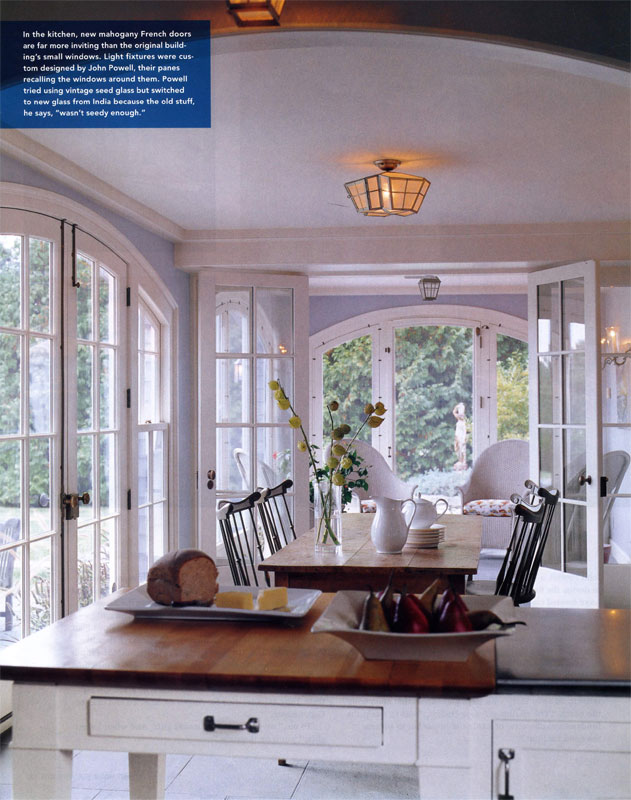 In the kitchen, new mahogany French doors are far more inviting than the original building’s small windows. Light fixtures were custom designed by John Powell, their panes recalling the windows around them. Powell tried using vintage seed glass but switched to new glass from India because the old stuff, he says, “wasn’t seedy enough.” 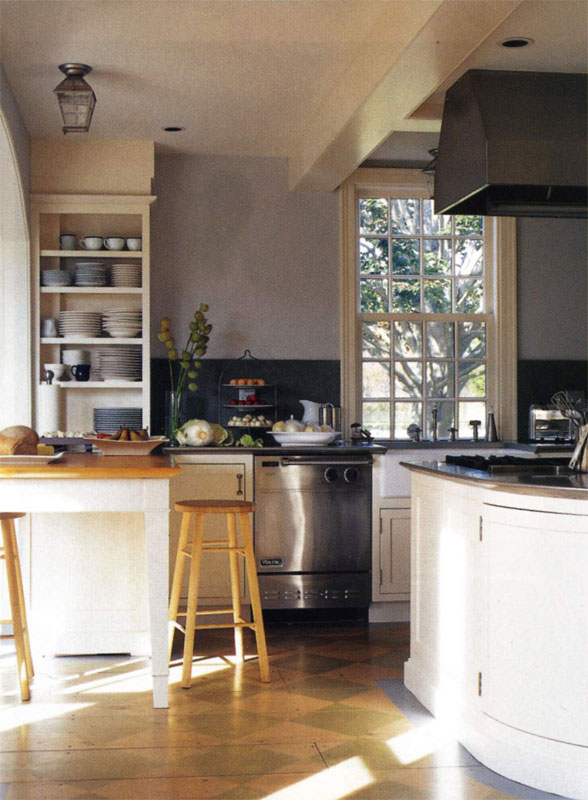 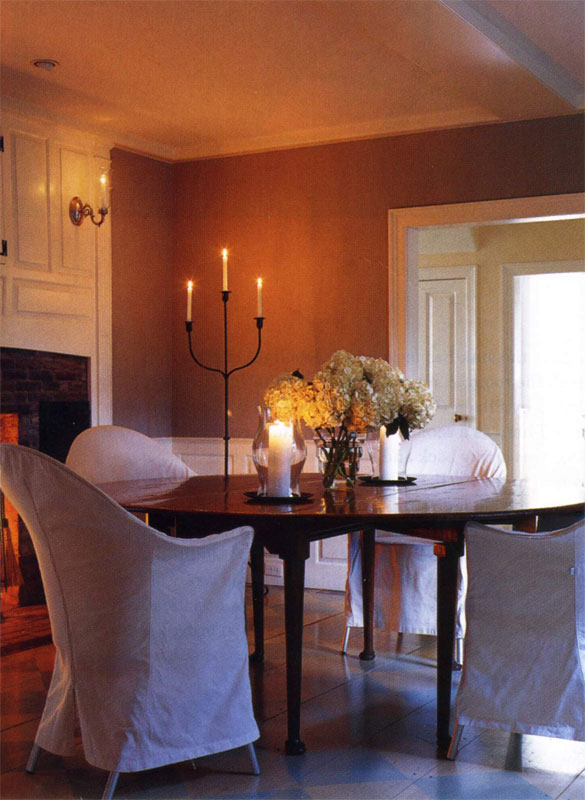 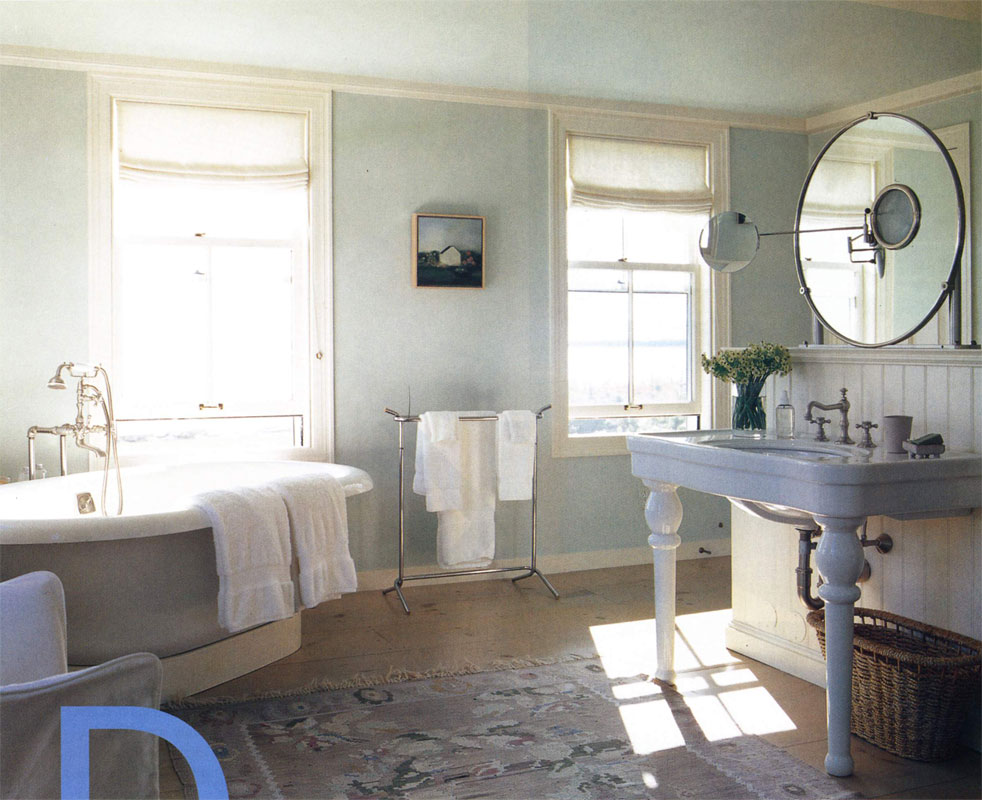 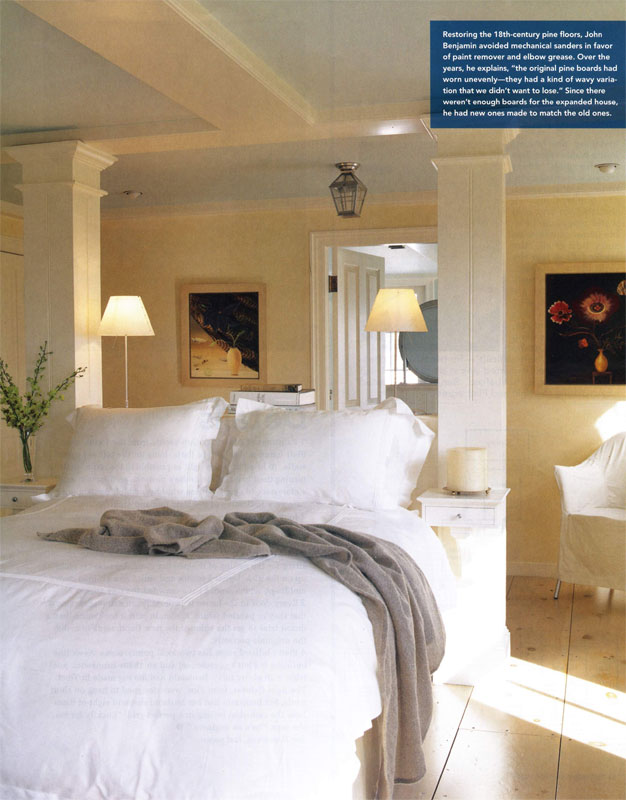 Restoring the 18th-century pine floors, John Benjamin avoided mechanical sanders in favor of paint remover and elbow grease. Over the years, he explains, “the original pine boards had worn unevenly—they had a kind of wavy variation that we didn’t want to lose.” Since there weren’t enough boards for the expanded house, he had new ones made to match the old ones.